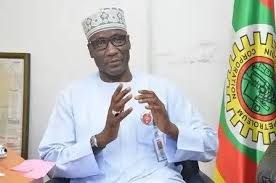 The Group Managing Director of the Nigerian National Petroleum Corporation (NNPC), Mallam Mele Kyari, has called for the support of NAPE to enable the nation to attain her 3 million barrels per day and the 40billion reserve aspiration.

Kyari made the submission when he received the leadership of the Nigerian Association of Petroleum Explorationist (NAPE) at the NNPC Towers, Abuja on Tuesday.

He stated that the Corporation would galvanize its partners in the direction of attaining national goals and aspirations for the economic wellbeing of the nation and its citizens.

The GMD also assured the Corporation’s determination to work together with other arms of the Federal Government to create a favourable fiscal landscape that would encourage inflow of foreign direct investment into the nation’s oil and gas industry.

Speaking on the ongoing exploration of inland basins, NNPC helmsman revealed that the significant progress has been made, adding that the target of growing the nation’s reserve to 40billion barrels by 2023 was realistic and achievable.

The Corporation in a statement by its spokesman, Mr Ndu Ughamadu stated that the Corporation was revving up exploration activities in all the frontier basins to achieve the 3 million barrels per day crude oil production target within the shortest possible time.

Kyari further stated that his management’s focus on Transparency and Accountability with Performance Excellence (TAPE) was geared towards transforming the NNPC into a global company of distinction, stressing that the Corporation was the window to the Nigerian oil and gas industry.

He said the national oil company would invest more efforts and resources in the search for hydrocarbons in the frontier basins and the ultra-deepwater basin in the Niger Delta in order to grow the nation’s reserve base.

Kyari said, “We promise that we are going to be transparent and accountable to all our stakeholders. We will drive this company to become a company of global excellence through excellent performance. This is very possible and there are strong indications that this is achievable.”

Speaking earlier, the President of NAPE, Mr Ajibola Oyebamiji, congratulated Mallam Kyari on his well-deserved appointment and assured him of the association’s support in growing the nation’s reserve base.

Oyebamiji who was accompanied by the leadership of NAPE said the current management of NNPC’s vision of TAPE was in tandem with the vision of the association.

Ghana to Introduce Action Policy To Protect Self Against Oil Majors