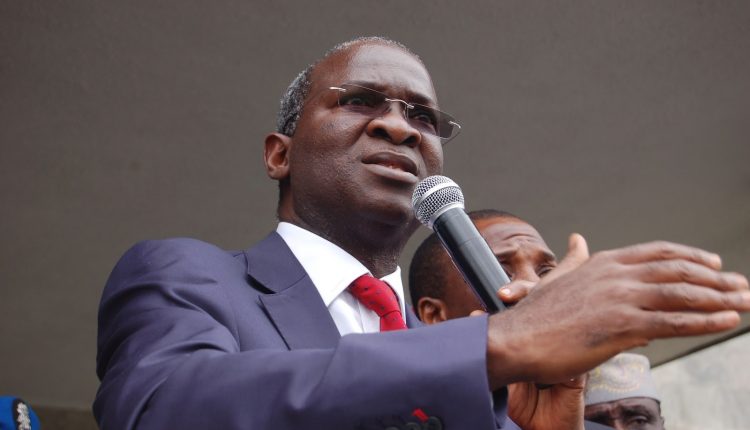 Nigeria is working relentlessly to deliver 30 per cent of total energy capacity through renewables by 2030, Minister of Power, Works and Housing, Mr. Babatunde Fashola said last week in Abuja.

Findings by Orient Energy Review (OER) revealed that the Agreement, which was co-ordinated by the Nigerian Bulk Electricity Trading Plc (NBET), is a key component of the final stage of the Power Purchase Agreement (PPA) which the Federal Government signed with 14 Solar Power developers in July/August last year to deal with any premature termination of the PPA. In the recently signed agreements, Afrinegia Nigeria Limited is expected to deliver 50MW while CT Cosmos will deliver 70MW to the Grid on completion.

Delivering his speech at the event, the Minister described the signing of the PCOA as a giant leap, even as he stressed the significance of Nigerians investing locally as a way of supporting the ongoing efforts by Government in rebuilding the country.

He recalled that experience had shown that in the event of a stormy and cloudy weather in the country, it was the persistence, perseverance and indomitable spirit of the indigenous investors that government would count upon, noting that foreign investors would simply look elsewhere to a safer climate.

His words: “Sometimes when the weather gets stormy and cloudy, like it has been a few months back, some of the first people to go are the moving investors as they look for calmer weather. It is the persistence and perseverance and the indomitable spirit of Nigerians who have invested in Nigeria that will help to support the efforts that Mr President and the Vice President and the Nigerian Government are making to rebuild the Nigeria that we want to see.”

The Minister who was obviously elated at the decision of the companies to key into the current administration’s plan to reviving the economy, noted that the solar development initiative was in line with the Federal Government’s Economic Recovery and Growth Plan (ERGP) stressing that one of the five priority actions of the 60 interventions in the Plan is power supply which falls under the mandate of the ministry.

He noted that the initiative also mirrors the objective of his ministry to get incremental power wherever it was available, safe and environmental friendly adding that it is also in line with the g1lobal trend in renewables and Nigeria’s commitment as a signatory to the Agreement, to seek additional sources of renewable energy. The move, according to Fashola is to deliver energy in the way that sustains the planet and human life for a more enduring period, with a near zero incidence of hazards.

As it were, Nigeria has finally begun to take steps to harness its renewable energy endowment, in what appears an official eagerness to embrace energy mix for a sustained power supply over a long period of time

Meanwhile, GreenWish Partners, a renewable energy developer committed to African renewables, is set to invest a whopping US$280 million to build 200MW worth of solar PV plants in Nigeria.

The company expects rapid procurement, hoping that the plants will commence power production producing in the first quarter of 2018. GreenWish has already signed a long-term PPA with the Nigerian Bulk Electricity Trading company (NBET) to field power produced from the plants into the national grid.

For a start, the company is set to construct a 100MW solar plant in Enugu, and two 50MW plants in both Kaduna and Jigawa. In the words of the company’s Chief Executive Officer, Charlotte Aubin-Kalaidjian, the projects will be financed 70% through debt and 30% through equity.

Although GreenWish develops PV projects in West Africa at large, reports indicate it is yet to hit Nigeria, though she has been a priority in the past two years. With strong reliance on expensive and dirty fossil fuels such as diesel, the country faces a massive energy deficit, if sufficient will is not mustered to explore alternative sources of energy, particularly the renewables.

The planned 200MW of solar power in the first quarter of 2018 will provide sufficient energy for an estimated 2.5 million people, while displacing 1.5 million tonnes of carbon dioxide emission.

“ In the northern region where there is a higher deficit of power and a very large need for growth, our view is that solar can really bring a lot to the diversification and increase the energy mix of the country; especially where gas is harder to bring in,” Aubin-Kalaidjian told CNBC Africa in an interview monitored by OER.

Asked what informed the decision of the company to finally hit the Nigeria market, Aubin-Kalaidjian cited Nigeria’s key ingredients of political commitment with technical capacity and a strong case for solar as reasons for GreenWish prioritising the country

“A high political commitment is the number one reason we are developing solar in Nigeria. We also see strong technical people within the government to negotiate with, and these are really key factors,” she added.

Aubin-Kalaidjian likened the political stability and willingness to integrate renewables from Nigeria’s government to the government in Senegal, where GreenWish was able to construct the first solar IPP within 12 months duration.

Indeed, currency risk is a monumental challenge in the Nigerian market as power shortages have significantly devalued the naira by more than a third of its value in the past year. These daunting tasks notwithstanding, GreenWish Partners is set to take full advantage of the huge market Nigeria offers to commence business in the months ahead.

“We have projects in West Africa from Senegal to Ivory Coast but Nigeria is a key priority because we see this high deficit of power and this high potential for solar. If we get confidence that we can take this [200MW] project to financial close, I want to do more. We have over US$1 billion investment capacity, so there is plenty of room to do more,” she added.

Nigeria, no doubt would have taken a significant step in the quest for industrialization if she succeeds in leveraging on her alternative energy sources to boost power supply across the length and breadth of the country.