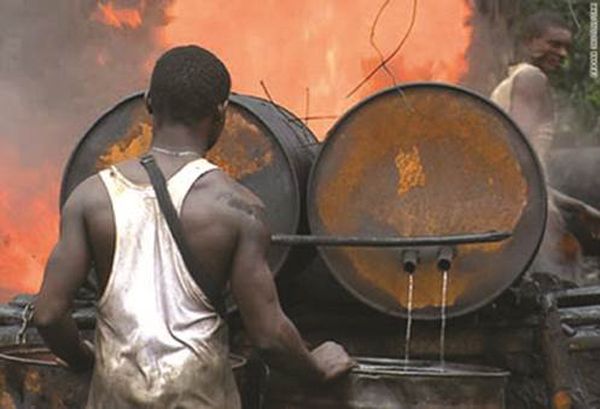 When Boko Haram captured territory in Nigeria’s northeast last year and declared a caliphate, there were real fears for the sovereignty of Africa’s most populous nation.

A deadline is looming for the military to end the six years of violence, with signs that troops have wrested back control of most of the towns and villages lost to the Islamists.

But now President Muhammadu Buhari is facing another potential headache with the revival of separatist sentiment in the country’s southeast and renewed debate over the sharing of oil wealth.

Recent weeks have seen a wave of protests calling for an independent state of Biafra, 45 years after the end of the brutal civil sparked by a previous declaration of independence.

Now, campaigners in the oil-producing Niger delta are demanding total control of resources to develop the region, which remains under-developed despite billions of dollars earned from crude.

“The 13 percent (share for the Niger Delta) enshrined in the 1999 constitution by the military is depriving us of our God-given resources,” the group’s convener Annkio Briggs told reporters in Lagos.

“We want 100 percent control and ownership of our oil so that we can control our future.”

The Reality of Snakebites: Time is Tissue

Nigeria’s crude-reliant economy has been battered by the fall in global oil prices, hampering government spending and even the payment of state-sector salaries.

How much each state in the federation gets from the sector has long been a thorny issue, exposing barely concealed regional and ethnic rivalries.

Demands for a greater share of oil revenue were a factor in the violence that gripped the delta in the 2000s until a government amnesty programme, which ends this year, bought off militants.

Briggs’ group argues Nigeria’s political architecture, with 19 states classed as northern and 17 in the south, unfairly penalises the southern states where oil is found.

“Of the 774 local government areas (administrative divisions within each state), the north is given almost 70 percent,” she said, calling it “manipulations for… socio-economic and political dominance”.

She blamed a succession of northern-dominated military governments for forcing through the revenue-sharing agreement down the barrel of a gun “without our free, prior and informed consent”.

Briggs denied calling for a break away from the federation but argued every region instead should use its own natural resources to develop itself.

The NDSDM was founded last year during a national conference convened by former president Goodluck Jonathan at which delegates recommended the delta region received 18 percent of oil revenue.

The recommendation was not implemented before Jonathan left office.

Nigeria is almost evenly split between a Muslim-majority north and largely Christian south and the sharp division informs most aspects of political debate.

But the argument for so-called “fiscal federalism” is seen by some as unrealistic, with sectors such as agriculture and manufacturing not sufficiently developed yet to be sustainable.

“Why is it after the defeat of Jonathan you see the likes of Annkio Briggs, MASSOB (Movement for the Actualisation of the Sovereign State of Biafra) and IPOB (Indigenous Peoples of Biafra) asking for resource control and self-determination?” he asked.

The complaints in fact exposed the failure of Jonathan, from the oil-producing Bayelsa state, to help his southern kinsmen during his six years in power, he argued.

“Those who lost out in the power equation are behind the crisis,” he claimed.

But Tony Nnadi, of the Movement for New Nigeria, said every ethnic group had the right to either belong to or pull out of Nigeria, nearly 102 years after the country was formed.

“In 1914, the so-called Nigeria came into being through an amalgamation of southern and northern protectorates by the British colonial power,” he said.

“By the provisions of the amalgamation, we have the right since 2014 to renegotiate the basis of our continued existence.

The experiences of various ethnic groups “in the last 100 years have shown we cannot continue in the marriage”, he added.