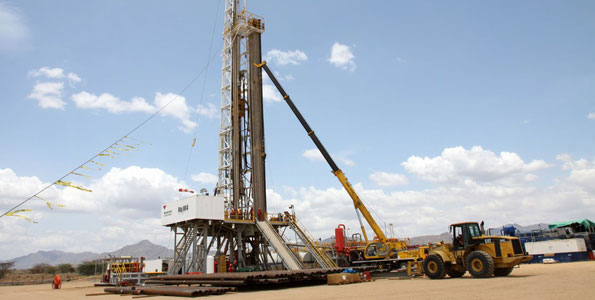 Tullow Remains Upbeat About 2016 despite fall in Oil Price

Tullow Oil Plc (Tullow) has indicated that it is upbeat about the company’s prospects in 2016, projecting that, “In 2016, West Africa average working interest oil production guidance is expected to be in the range of 73,000 to 80,000 bopd. This includes production from the TEN development which remains on track for first oil between July and August 2016.”

In 2015, West Africa working interest IN oil production was within guidance averaging 66,600 bopd.

In a trading statement and operational update issued on January 13 to summarise recent operational activities and to provide trading guidance in respect of the financial year to 31 December 2015, Tullow said Jubilee production performance for 2015 exceeded the 100,000 bopd target, averaging 102,600 bopd gross (net: 36,400 bopd).

It pointed out that good performance from the onshore gas processing facility has allowed significant gas export from the Jubilee field with an average rate of gas export of around 85 mmscfd in the last quarter of 2015.

Tullow is forecasting Jubilee 2016 average production to be around 101,000 bopd gross (net: 36,000 bopd). This reflects the impact of a planned two week FPSO maintenance shutdown in the first quarter 2016 and a period of reduced water injection capacity which is currently being addressed.

The Greater Jubilee Full Field Development Plan (GJFFD), which includes the Mahogany and Teak fields, was submitted to the Government of Ghana in December 2015 and approval is targeted for the first half of 2016. This project, to extend field production and increase commercial reserves, has been redesigned given the current environment, to reduce the overall capital requirement and allow flexibility in the timing of the capital investment.

The TEN Project continues to make excellent progress, is over 80% complete, and remains within budget and on schedule for first oil between July and August 2016. To date, all the key milestones of the project have been met, with the next important event being the sailaway of the TEN FPSO from Singapore to Ghana. The vessel is expected to depart in late January 2016 and arrive in Ghana in early March when the vessel will begin to be connected to the risers and subsea infrastructure. A gradual ramp up in production towards plateau is anticipated during the second half of 2016 as the facilities go through the final commissioning stage and wells are tied into the FPSO. Tullow estimates that TEN average working interest production in 2016 will be around 23,000 bopd gross (net: 11,000 bopd).

During 2015, Tullow increased the capacity of its RBL and Corporate Facilities by $450 million. At the end of 2015, Tullow had total facility headroom and free cash of $1.9 billion and net debt of $4.0 billion. The improvement in the year end net debt and liquidity versus previous forecasts is largely due to ongoing capex and cost management plus the timing of payments in relation to the TEN Project which has resulted in 2015 Group capex totalling $1.7 billion versus guidance of $1.9 billion.

In 2015, Tullow is expected to deliver revenue of some $1.6 billion, gross profit of $0.6 billion and operating cash flow of $1.0 billion, all in line with market expectations. Due to the current low oil price, a number of accounting charges are forecast to be incurred in the 2015 income statement. These charges comprise a post-tax exploration write-off of c.$0.4 billion, a post-tax impairment charge of c.$0.3 billion and an onerous rig contract charge of c.$0.2 billion as a result of much lower levels of exploration and appraisal drilling activity planned for 2016.

As we look ahead to 2016, Tullow’s hedging position provides significant protection of future revenues and cashflows. The mark-to-market value at the end of December 2015 was $623 million and Tullow will benefit in 2016 from approximately 52% of entitlement oil production hedged at an average floor price of around $75/bbl on a pre-tax basis and approximately 64% hedged on a post-tax basis. These hedges are accounted for separately and are not used in impairment calculations which compare book values with future pre-hedge discounted cash flows.

The Group’s capital expenditure associated with operating activities has reduced from $1.7 billion in 2015 to $1.1 billion in 2016 and the Group is looking at additional opportunities to reduce it further. The current total comprises TEN capex of c.$600 million, Jubilee of c.$150 million, West Africa non-operated of c.$100 million, East Africa pre-development expenditure of c.$150 million and Exploration and Appraisal of c.$100 million.

Despite current low oil prices, Tullow expects to maintain sufficient liquidity throughout 2016. The Group starts the year with financial headroom of $1.9 billion, is benefiting from a significant hedge position, will see West Africa oil production increase with TEN first oil and will continue to focus on reducing costs and capex across the portfolio. The primary focus of the Group in 2016 remains to deleverage the balance sheet.

The trading statement and operational update is in advance of the Group’s Full Year Results, which are scheduled for release on Wednesday 10 February 2016. The information contained herein has not been audited and may be subject to further review and amendment.