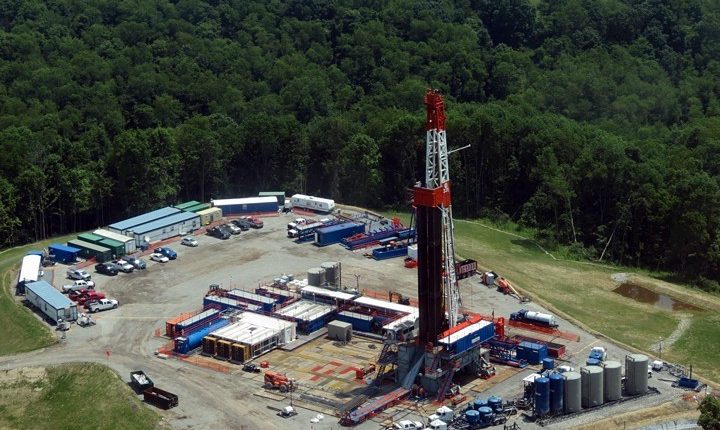 A gas-drilling rig in Hopewell in Washington County, Pennsylvania, USA.

In 2008, U.S. crude oil production had fallen to only 5 million barrels a day, a drop of almost 50% from the peak production of 9.6 million in 1970 and down to the lowest level of domestic crude output in more than 60 years, going all the way back to 1946. But then the revolutionary drilling technologies of hydraulic fracturing and horizontal drilling sparked the great American shale revolution, and the abundance of domestic shale oil quickly reversed the 36-year decline in U.S. output in only seven years.

Now the second-largest producer of natural gas in the U.S., Pennsylvania shale gas is driving down energy costs and opening new opportunities for manufacturers. Businesses ranging from small family operations to huge multinational corporations are taking advantage of Pennsylvania’s abundant natural resources to advance their businesses in today’s global economy. The proposed Shell Ethane Cracker Plant is one of such opportunities.

Pennsylvania is at the forefront of America’s energy revolution. As a result of its abundant shale resources, the United States has surpassed both Saudi Arabia and Russia as the world’s leading oil and natural-gas producer in the recent past.

The Marcellus shale in West Virginia, Pennsylvania, and New York, once thought to be played out, is now estimated to hold 168-516 trillion cubic feet (14.6 trillion cubic metres) still available with horizontal drilling. It has been suggested that the Marcellus shale and other Devonian shales of the Appalachian Basin, could supply the northeast U.S. with natural gas.

Being the largest U.S. natural gas field in the U.S, the Marcellus Shale, underlies about 60% of the state in an arc reaching from the southwest to the northeast. It stretches from upstate New York south through Pennsylvania to West Virginia and west to parts of Ohio.

The Utica Shale lies under most of New York, Pennsylvania, Ohio, and West Virginia and extends under adjacent parts of Ontario and Quebec in Canada and Kentucky, Maryland, Tennessee, and Virginia in the United States.

Although before 2008 the Marcellus Shale was considered to have inconsequential natural gas potential, it is now believed to hold the largest volume of recoverable natural gas resource in the United States.

Pennsylvania broke the record by producing 4 trillion cubic feet of cleaning-burning energy a record in itself. Pennsylvania boasts both Utica and Marcellus Shale plays. Over 25,000 natural gas wells are drilled in Pennsylvania since 2007.

In September 2012, the Marcellus Shale overtook the Haynesville Shale of northwest Louisiana as these leading producers of both shale gas and overall natural gas in the United States.

In February 2014, Marcellus gas wells produced 14.0 billion cubic feet per day a 42 percent increase over the earlier year and comprising 21 percent of all the dry gas produced that month in the United States.

As per US Department of Energy, in US Shale Basins Marcellus fairway is 40,000-50,000 square miles with estimates of recoverable reserves up to 500 TCF .The current US natural gas demand is 23 TCF per year.

It is worth mentioning that Bernett in Pennsylvania which is the largest US gas field provides 6% of US natural gas. The Bernett core is 5,000 square miles. Since natural gas is difficult to transport, it is priced as a regional commodity using the “Henry Hub” price as the benchmark.

According to Pennsylvania Public Utility Commission’s “Gas Outlook Report, June 2015”, superabundance of natural gas, lack of pipeline infrastructure and Marcellus has one of the lowest breakeven costs of any shale play in the USA and are the three prime reasons why the PA shale gas is more affordable, according to Paul McCloskey, Vice President of Energy & Business Development, Clearly Ahead Development; a leading resource agency for economic development in Clearfield County, Pennsylvania.

Paul while making a presentation on the “Future Opportunities from the Energy Sector” during the International Media Tour of  Mining, Oil and gas facilities of CORE PA, gave a vivid illustration of the Marcellus Shale, the US natural gas, pricing and other energy related topics.

Pennsylvania has the greatest numbers of active and permitted Marcellus Shale wells in the nation, with Marcellus Shale drilling activities expected to continue within the Commonwealth for years into the future.

Even as natural gas production reshape the U.S. economy and redefines America’s competitive advantages there is still room to grow, as there is a mismatch, geographically, in natural gas supply and demand. New pipeline and processing infrastructure will be keys to connecting new supply sources with new and growing sources of demand, especially in manufacturing sectors

Supplementing the manufacturing industry, the U.S. natural gas boom has resulted in stable wholesale electricity prices, lower greenhouse gas emissions and greater system flexibility. In fact natural gas is transforming the United States into a major supplier to the global energy markets with Pennsylvania as national leaders in terms of low cost energy for manufacturers.

Pennsylvania is the fastest growing state for FDI in the US