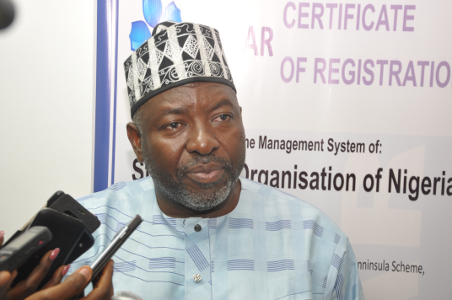 Paul Angya, the Acting Director-General, Standards Organisation of Nigeria (SON), has appealed to the Federal Government to return the agency to the seaport to stop importation of sub-standard goods into the country. The former Minister of Finance, Ngozi Okonjo Iweala had in 2011 sacked about nine agencies including SON from the port.

According to Angya, there is need for SON officials to be at the port as it would go a long way in minimizing the importation of substandard goods. He said the Minister of Trade and Investment, Okechukwu Enelemah had directed the agency to work towards reducing the spate of sub-standard products into the country. “The problem of substandard products is so alarming that it is diverting government priority from present challenges and there is need to stem the tide and the only way to do that is to speak the truth to ourselves,” he said

He noted that the Standard Organisation of Nigeria Conformity Assessment Programme (SONCAP) certificate programme put in place to regularise the standard of importation of goods is being abused by importers.

He warned that any importer who imports without SONCAP certification by July 2016 would be charged for a fine of 20 per cent of the value of goods imported, adding that even if the goods had been cleared by the importer, SON would go after such goods, destroy it and charge the importer for the destruction.

“All stakeholders involved in the importation of SON regulated products should go back to certifying their products offshore before bringing them in.

“The SONCAP certification of your product before imports has advantage for your business and national economy at large.

“You are assured of the quality of the goods you are importing and you will also give the consumers of your goods value for their money,” he said.

Angya said the agency would need additional 10,000 staff to fight substandard products in the country.

He said that if more staff were employed, they would be able to go far places in the country to check substandard products.

“We have just 1,500 staff at hand and there is no how they can cover the market places in the country.

“It was recommended in 1993 by government officials that SON needed 10, 000 staff for its operations,” he said.

‘This company was founded with N3000 borrowed from Union Bank; built on a high level of integrity, transparency, and commitment to work – Arco Boss, Okoigun