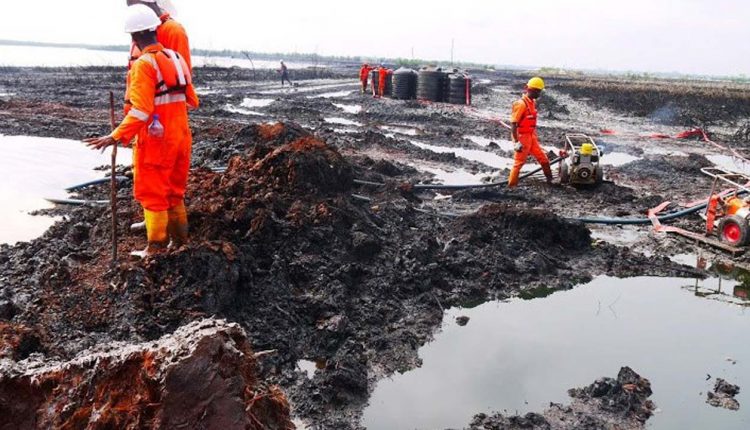 The Social Development Integrated Centre (Social Action, Nigeria) has raised a three-point query to the Hydrocarbon Pollution Remediation Project, HYPREP demanding the Ogoni Clean-up implementation framework or timetable showing activities’ schedule, inception to date and in-view.
Speaking at a civil society organizations/media forum in Port Harcourt on Monday, Vivian Bellonwu, Head, National Advocacy Centre, Social Action revealed that the group’s query is based on the Freedom of Information Act, noting that it also demanded two other major information relating to the implementation of the United Nations Environmental Programme (UNEP) report on the clean-up of Ogoniland.
According to the Social Action, they include: “List of the 21 company so far awarded the Ogoni Clean-up contract jobs, indicating their lots, job types, specifications, etc. Also, details on the emergency measures (including the livelihood project(s) so far done towards the cleanup, by HYPREP in line with the 2011 UNEP Report”.
Bellonwu explained that Social Action’s interest on the issue of clean up of the environment goes beyond Ogoniland to include the entire Niger Delta region saying “Ogoni Clean up is more or less a pilot and if it doesn’t start up well, straightening it might be challenging”.
The letter which was signed by Bellonwu and directed to the Project Coordinator, HYPREP, Marvin Dekil, reads in part:
“The Social Development Integrated Centre (Social Action Nigeria), has followed with keen interest, government’s actions and efforts on the implementation of the United Nations Environmental Programme, (UNEP) report assessment of hydrocarbon pollution of the Ogoni environment.
“Being one of the leading organizations that have frontally championed the cause of environmental rights as well as that of livelihoods of the local community people, Social Action has noted the attempts by the government to clean up and indeed remediate the polluted Ogoni environment in line with the recommendations of the UNEP Report including the establishment of the Hydrocarbon Pollution Remediation Project.”
While the government’s intention in establishing HYPREP could be noble, a number of the steps and activities around the report implementation have unfortunately been shrouded in some level of obscure and indistinct procedures and mechanisms that has not helped to shore up citizen’s confidence in the process. We are however, gladdened by HYPREP’s avowed commitment to the principles of transparency and accountability which it has severally reiterated at different fora”.
The Head, National Advocacy Centre, Social Action further explained that the requested information would help provide stakeholders with a clearer insight into the activities of HYPREP and strengthen them further in working with the communities towards achieving the desired outcomes of as well as the well being of communities and their inhabitants.
The group also accused Shell Development Company, SPDC, identified as the main culprit in the pollution of the Ogoni environment of displaying a lack of commitment to the Clean-up exercise.
Participants at the forum urged civil society organizations, media, community and other stakeholders to consistently demand the independence of HYPREP for it to be able to perform its mandate.
Participants also noted that Shell as a major culprit in the Ogoni land pollution, that despite providing a lion share of the clean-up fund should not be a member of the Board of Trustees of HYPREP, adding that the agency should also be made independent of the Ministry of Environment to enable it to perform better.
Social Action said it won’t relent in its demands until it gets a response from HYPREP, adding it could take legal action to force the agency to be transparent and accountable to the Nigerian people on its activities in the cleanup exercise.