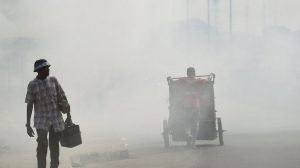 Black soot in Rivers State is believed to be caused by incomplete combustion of hydrocarbons by artisanal oil refiners and security agencies who sets ablaze stolen petroleum products, while multinationals oil companies operating in the state have also been fingered.

Governor Wike, speaking at the 58th Annual General Meeting and Scientific Conference of the Nigerian Medical Association, NMA, in Port Harcourt, said the state government was taking lead role to curb activities leading to the soot.

Wike, represented at the event by the State Commissioner of Health, Dr. Princewill Chike, explained that the state government was currently collecting data, procuring equipment and carrying out research on how to end the soot.

He frowned at the high level of environmental degradation in some communities in Degema, Gokana, Asari Toru and Akuku Toru Local Government Areas of the state, where illegal refining activities were taking place and called on security agencies to support the fight against illegal refineries.

“The ministry of health has taken the bull by the horn by initiating investigations and study to look at the respiratory system at designated cancer screening centres so that related cancer disease, which we believed are associated with this soot, can be handled effectively.

“So far, we are not relenting, we are involving specialists in different fields to also assist us.”
Earlier, the convener of StopTheSoot Campaign, Mr Eugene Abel, accused the Rivers State chapter of NMA of not doing enough in the face of the soot menace, especially as  those treating the final consequence or victims of the pollution.

However, NMA Chairman in Rivers State, Dr. Datonye Alasia, debunked the accusation, saying the cause of the pollution will be unravelled in due course as investigations and research are ongoing.

It should be noted that the theme of the 58th Annual General Meeting and Scientific Conference of the Nigerian Medical Association, is “Healthcare Delivery in Rivers State, a Situation Analysis.”