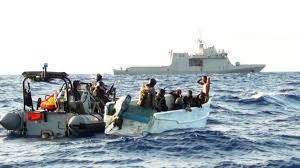 A report has said that crew kidnappings and violent attacks on vessels in the Gulf of Guinea have soared in 2020, with 77 seafarers taken hostage or kidnapped for ransom since January.
The situation has caused the United States of America to issue a Maritime Security Communication with Industry (MSCI), to guide vessels transiting through the Gulf of Guinea, alerting vessels of potential attacks by pirates.

The Gulf of Guinea is an important geo-political choke point for shipping transporting oil extracted in Nigeria’s Niger Delta region, as well as goods to and from central and southern Africa.

In their report, the ICC International Maritime Bureau’s (IMB) said in their latest piracy report that the Gulf of Guinea has become increasingly dangerous for commercial shipping, accounting for just over 90% of maritime kidnappings worldwide.

IMB Director Michael Howlett, said in the report that, “Violence against crews is a growing risk in a workforce already under immense pressure. In the Gulf of Guinea attackers armed with knives and guns now target crews on every type of vessel. Everyone’s vulnerable.”

In total, IMB’s Piracy Reporting Centre (PRC) recorded 98 incidents of piracy and armed robbery in the first half of 2020, up from 78 in Q2 2019. The increasing threat of piracy adds to hardships already faced by hundreds of thousands of seafarers working beyond their contractual periods due to COVID-19 restrictions on crew rotations and international travel.
“Violence against crews is a growing risk in a workforce already under immense pressure. In the Gulf of Guinea attackers armed with knives and guns now target crews on every type of vessel. Everyone’s vulnerable,” the IMB director stated.

So far this year, 49 crew have been kidnapped for ransom in the Gulf of Guinea and held captive on land for up to six weeks, IMB said adding that rates are accelerating, with 32 crew kidnapped in the past three months alone. And they are happening further out to sea: two-thirds of the vessels were attacked on the high seas from around 20 to 130 nautical miles off the Gulf of Guinea coastline.

IMB PRC urges vessels to report any attacks promptly, pointing out that it is capable of liaising with coastal agencies, international navies and vessel operators, to secure a quick response to deter piracy and armed robbery and improve the security of seafarers.

The Piracy Reporting Centre also broadcasts to shipping via GMDSS Safety Net Services and email alerts to Company Security Officers. “We need to change the risk-to-reward ratio for pirates operating within the Gulf of Guinea. Without an appropriate and proportionate deterrent, pirates and robbers will get more ruthless and more ambitious, increasing the risk to seafarers,” says Howlett.

Two cases where highlighted by IMB. In one case, the Nigerian Navy responded quickly and rescued a fishing vessel boarded and hijacked by armed assailants in Ivory Coast waters. In another incident, a product tanker was attacked while underway around 127 nm off Bayelsa, Nigeria.