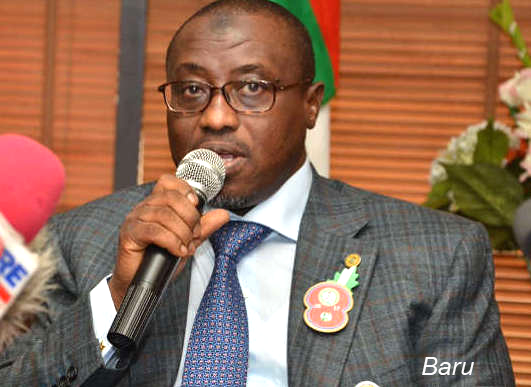 The Group Managing Director of the Nigerian National Petroleum Corporation (NNPC), Dr. Maikanti Baru, has assured of the corporation’s commitment to securing funding for the completion of a new head office of the Nigerian Petroleum Development Company (NPDC), one of the flagship upstream subsidiary companies of the corporation.
According to a statement by the NNPC in Abuja, Baru gave the assurance while leading NPDC’s Board Members on an inspection tour of the new office building in Benin, Edo State. Baru, who described the new head office building as world-class, said work on the project had currently reached 92 per cent completion and would continue once the necessary approvals for the project’s re-design have been sought from relevant authorities.
“We are making effort to get the Bureau of Public Procurement (BPP) to give us the certificate of no-objection to enable the Federal Executive Council’s approval of the variations. Once we obtain those approvals, we can remobilize the contractor fully. In a week’s time or so, we look forward to meeting the BPP’s requirements to enable us obtain FEC approval towards the project completion,” he noted. Baru charged that the project should be completed as soon as possible, stressing that now, most of what was left borders around Information and Communication Technology (ICT) facilities installations, which, he said, were a very vital component in modern buildings and especially for an upstream operator like the NPDC.
The NNPC said the project, which commenced in August 2012, was billed to be completed by 2014. However, following enhancements on the initial designs, the project cost and delivery schedule increased, thereby requiring further approvals to go ahead with its execution Also speaking, Managing Director of the NPDC, Mr. Yusuf Matashi, commended Baru for leading NPDC Board members to inspect the building for the second time, which, he noted, demonstrated his leadership and commitment towards the project completion. Matashi further called on Baru and the board members to sustain the effort by complying with all the prerequisite requirements towards delivering the project which at the end will not only add significant value to the company, but will also make its staff proud.
“At this stage of its development, NPDC deserves a befitting office accommodation and convenient operating environment. It is also significant in terms of organisation and security of the company and its staff,” Matashi observed. Speaking in the same vein, NNPC’s Chief Financial Officer, Mr. Isiaka Abdulrazaq, assured that once the corporation got through with the requirements around the extant laws and the necessary approvals, there would be adequate funding to complete the project.
On its part, the contractor, Bouygues Nigeria Limited, represented by the Site Manager, Mr. Ameh John, assured the GMD of his company’s commitment to deliver on the project once the remaining contract technicalities were concluded. Located along the Airport/Ogba Road in the heart of Benin City, the NNPC said the new NPDC head office building consists of a training centre that will accommodate 250 persons at peak periods.
It added that the training centre can also be used as an independent 60-seater training room with flexible folding partitions, ancillary spaces for storage and lounge activities.
“It is a magnificent tower made up of seven floors including the basement level, and a modern auditorium that can become a meeting place for the entire NNPC management,” the NNPC said.