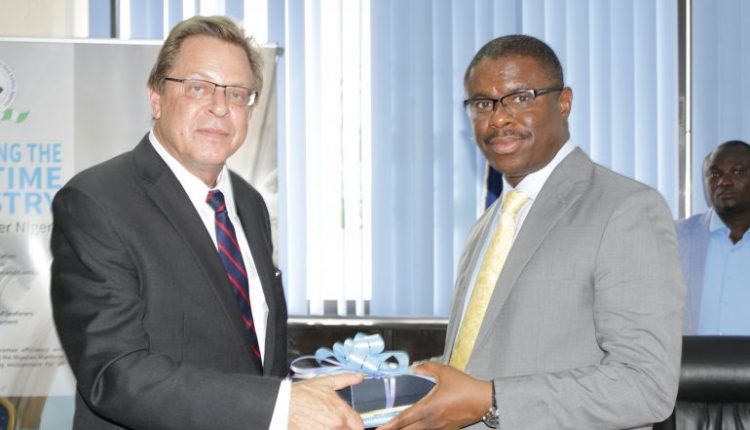 In continuation of the drive to re-position the Agency and establish partnerships for the sustainable growth and development of the Nigerian maritime industry, the Nigerian Maritime Administration and Safety Agency (NIMASA) has called on the United States Government to partner the Agency in the area of capacity building.

Dr. Peterside, who acknowledged the long standing relationship between the two countries and other existing bilateral agreements, said that the Nigerian government will surely need the assistance of the United States government in the area of technology driven security surveillance as well as human capacity building.

A statement signed by Hajia Lami Tumaka, head of public relations of NIMASA, noted that the DG said that the business of shipping is global and having done so well for them in this area, Nigeria can benefit from the experiences of the Americans in order to harness the potentials in the nation’s maritime domain.

“The need for sharing ideas cannot be overstated, because shipping is a global business that links economies of the world together and Nigeria can learn from the experience of the United States. We are currently repositioning the maritime industry and our dream is to be the hub of maritime activities in Africa,” the DG said.

The NIMASA helmsman also used the opportunity to appeal to the United States representative to assist in the area of training and recruiting of the Nigeria Seafarers Development Programme (NSDP) cadets to the USA marine Navy in order to enhance their competency and skills.

Earlier in his remarks, the Consul General, Mr. John Bray disclosed that they are interested in the status of the co-operation between the two countries and also opportunities available in collaborating together.

While also responding to the Director General’s requests, Mr. Bray expressed the readiness of the United States to leverage on the already existing Memorandum of Understanding (MoU) between both countries to collaborate with the Agency and Nigeria at large towards achieving a vibrant and business friendly maritime environment.

The envoy who was accompanied by the Political Adviser in the Consulate Mr. Nicholas D. Austin commended the Director General for his efforts so far in the Agency and promised to continue to engage the Agency for a mutually beneficial relationship.