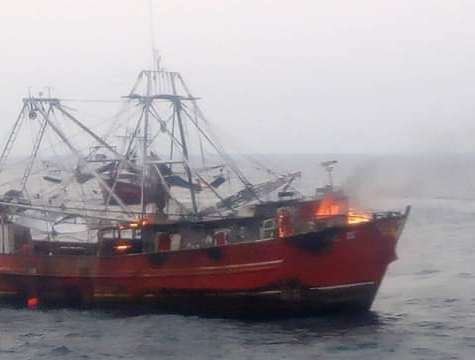 Nigerian Maritime Administration and Safety Agency, NIMASA has stated its rescue operation with assistance from Nigerian Liquified and Natural Gas, NLNG saved the alleged distressed vessel; MV ORC4 from sinking after it caught fire on Tuesday.

The Director-General of NIMASA, Dr Dakuku Peterside, explained that contrary to reports by some online platforms, not OER that NIMASA and NLNG abandoned MV ORC4 when the vessel sent a distress call, that it sunk and lives lost, that the Agency actually saved the vessel through its Search and Rescue Operations. He stated that the fishing vessel did not sink but currently at the ORC Jetty at Kirikiri Lighter Terminal in Lagos where it was safely towed after the rescue.

Peterside in a statement said, “The attention of the Nigerian Maritime Administration and Safety Agency (NIMASA) has been drawn to the news making the rounds in some online media platform that the Agency failed to provide assistance to a distressed vessel; MV ORC4.

He said, “Contrary to the false report which claimed that NIMASA and NLNG failed to provide assistance to a distressed vessel, resulting in the sinking of the vessel and loss of lives; the truth is that NIMASA and NLNG actually saved the vessel through its Search and Rescue Operations. The said fishing vessel did not sink and is currently at the ORC Jetty at Kirikiri Lighter Terminal in Lagos where it was safely towed after the rescue.

“For the records, NIMASA Search and Rescue Control Room received a distress call at about 20:00hrs on 6th Feb 2019 that a Vessel MV ORC 4 (ORC IV) was on fire at Bonny Anchorage and that the crews were abandoning the vessel. The Agency’s Search and Rescue Station swung into action and relayed the emergency call to shipping within the area in line with its statutory mandate as enshrined in SS.22(1) and SS.22(4) of the NIMASA Act 2007 and S.2(1) of the Merchant Shipping Act 2007 on Maritime Safety.

“After preliminary investigation and assessment of the distress, the Agency immediately sought collaboration with the Nigerian Liquefied Natural Gas (NLNG) whose firefighting tug was closest to the scene to assist in bringing the situation under control along with other neighbouring vessels who collaborated in the rescue exercise, in line with global shipping standard.

“Accordingly, the NLNG immediately swung into action by dispatching the firefighting tug boat named; CTOW ANN SOPHIE to the scene which was used to extinguish the fire.  The crew onboard were safely evacuated and the vessel safely towed to her owner’s jetty where she is currently undergoing repairs. ” DG, NIMASA.

No Going Back On 50% Derivation Demand – Igali

Reacting to the issue, Captain Sunday Umoren, Head, Maritime Safety and Seafarers Standards Department of the Agency, who commented the support of  Atlantic Shrimpers’ vessels, his team and NLNG for the successful operation in saving the fishing vessel said what was reported by the media was a misconception.

He said “there is a difference between emergency and salvage operations. Saving of lives is the mandatory action during an emergency and should be treated with top priority, but saving an asset is salvage, which is never free”.

Umoren added that, ” To save time, the salvor and the Master of the Vessel (to be salvaged) will agree for the operation to be under Lloyd’s Open Form (LOF), an international agreement which is a standard form contract for a proposed marine salvage operation which is aimed at eliminating pre-salvage negotiations deferring such to be decided by Arbitrators on completion of the salvage operation.” He said.

On the incident, the Head of Maritime Safety Department further hinted that post-incident analysis will be conducted and recommendations put forward especially on fixed firefighting systems on fishing vessels and that lessons learnt from the incident will be shared with stakeholders in the shipping industry.

Meanwhile, in a letter titled “Appreciation for Support During Fire Incident on Board ORCiv Trawler” Rahul Savara, the Group Managing Director, ORCiv Fishing and Food Processing Limited, thanked NIMASA Boss, and the Agency for the rescue efforts.

His words, “We would like to sincerely appreciate the Maritime Rescue Coordination Centre (MRCC) for every assistance provided during the fire incident. Your timely support in dousing the fire aided in reducing the material loss that would have been incurred as a result of the incident. Please remain assured of our utmost regards and best wishes.”