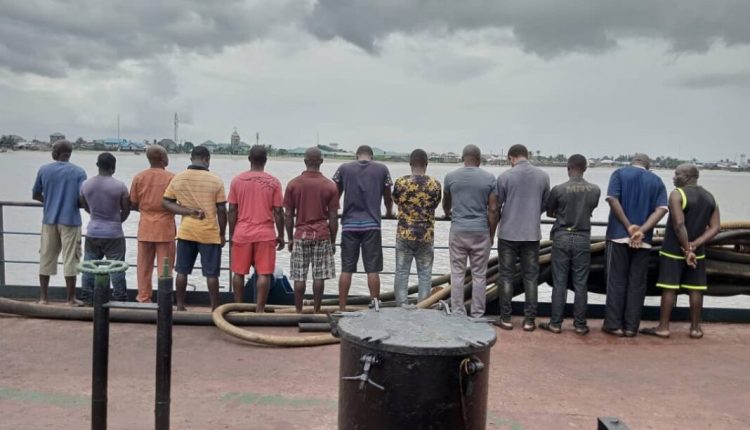 The commander of the Joint Task Force (JTF) operating under the name, Operation Delta Safe, Rear Admiral Aminu Hassan, has disclosed that his men arrested 567 suspected oil thieves and seized 13 ships carrying crude oil in the South-South region in 2021.

Hassan who said this at a news conference held recently in Yenagoa, the Bayelsa State capital, said that through a new approach that the JTF adopted, nine barges were seized during the year under review.

According to him, 1,423 illegal refining sites with over 4,929 storage facilities were also destroyed in the same period. Also, 536 large wooden boats loaded with illegally refined oil products and 137 trucks used for carrying them were seized.

According to Commander Hassan, JTF raided and destroyed 51 militants/pirates camps and recovered 153 assorted weapons and ammunition. He said that the Nigerian Navy took on piracy on the high seas within Nigeria’s territorial waters while the JTF did the same in the backwaters; the activities which according to him drastically reduced maritime crimes in the year under review.

Commander Hassan who quoted the International Maritime Bureau, said that piracy cases dropped from 46 recorded in October 2020 to 28 in October 2021. He added that only four cases were linked to Nigeria.

He said that JTF applied a non-kinetic conflict resolution method which led to the resolution of 54 cases between oil firms and their host communities. He therefore attributed JTF’s success in the period under review to the support given to operatives by the Chief of Defence Staff (CDS), General Lucky Irabor and other service chiefs.

The Unwarranted Tax on Domestic Gas

Labour Threatens To ‘Shut Down Nigeria’ Over Fuel Price Increase