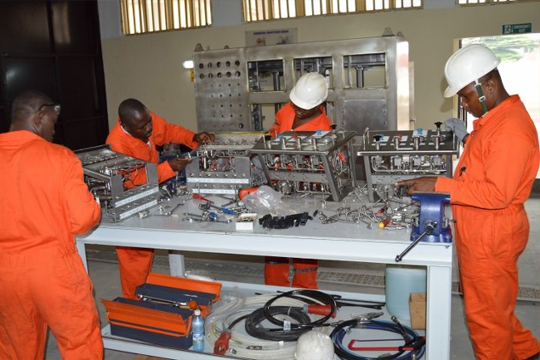 About five years ago, the Nigerian Oil and Gas Industry Content, NOGIC Act, came into force with the sole objectives to not only encouraging the participation of more Nigerians in the petroleum industry, but also increasing the contribution of the industry to the nation’s gross domestic product, GDP. Prior to introduction of the Local Content Policy in the oil and gas industry by the administration of former President Olusegun Obasanjo, the  absence of local capacity in the industry had resulted in repatriation of about 90 per cent of the $12billion yearly industry spending abroad, with its adverse effects on job creation and the growth of the economy.

This stemmed from the fact that the wider scope of the industry’s lucrative jobs was performed in foreign fabrication yards; while expatriate workforce dominated local strategic positions in the industry. Paucity of fund, absence of in-country capacity and inadequate manpower were identified as factors that denied the country the full benefits of her petroleum resources as only few indigenous facilities and manpower were involved in the oil and gas industry.

While indigenous facilities and manpower were yearning for oil and gas industry jobs, foreign yards were flooded with jobs that ought to benefit Nigerians and the country’s economy.

Even the attempt by the administration of Obasanjo to halt this trend by introducing the local content policy in 2003 to compel the foreign operators in the industry to domicile certain percentage of their jobs in-country recorded very minimal success because of absence of legislation to drive the policy.

Obasanjo’s administration had positioned the country to attain a local content target of 70 per cent by 2010 but only less than 10 per cent was achieved because mere persuasion adopted under the policy could not influence the International Oil Companies (IOCs) to key into the initiative.

On his appointment, Engr. Ernest Nwapa successfully confronted the enormous challenge of translating volumes of recommendations by the various stakeholders in the industry into a comprehensive, implementable policy document.

This document, which was submitted to the Obasanjo administration in February 2005, provided the framework for the creation of the Nigerian Content Development (NCD) within the NNPC in March 2005 to oversee the implementation of the local content policy.

The implementation of the Nigerian Content remained under the NNPC until the Local Content Bill put together by Obasanjo’s administration through the works of the NCD was signed into law as Nigerian Oil and Gas Industry Content Development (NOGICD) Act by President Goodluck Jonathan on April 22, 2010.

Since the Act, popularly referred to as the Nigerian Content Act was signed, the industry has recorded massive inflow of Foreign Direct Investment (FDI) and unprecedented boost in the development of local capacity and capability.

The Act was a bold response to the low participation of indigenous facilities and manpower in the oil and gas industry and since it was enacted with a visionary and dynamic agency, the Nwapa-led NCDMB driving its implementation, there has been a systematic but gradual reversal of this trend.

Today, many indigenous professionals are increasingly building capacity and proving their mettle in the execution of major projects, while an increasing number of multinational players have also been compelled by the legislation to domicile certain scope of their operations in-country.

With Nigerians developing competence in jobs that were the exclusive preserve of expatriates before the legislation was put in place, the scope of oil and gas industry jobs, which were executed outside the shores of Nigeria, are now being performed by Nigerians and in Nigeria.

In the area of exploration and exploitation of hydrocarbons, Nigerian independent exploration and production (E &P) companies, which were restricted to marginal assets before the Act was enacted, now have access to larger acreages, due to the divestment of onshore assets by the IOCs to boost indigenous participation in the industry.

These efforts have led to the retention of a large chunk of the industry expenditure in- country, with the attendant positive impact on employment generation and growth of Gross Domestic Product (GDP).

The Petroleum Technology Association of Nigeria, PETAN, believes that Nigerian companies have actually derived unique solutions to solve trying problems, especially in the deepwater. According to Engr. Emeka Ene, Chairman, PETAN, “Right now the world’s longest fibre security project is being done by a Nigerian company. It is the longest installation of such a solution.

It is a Nigerian company that is doing it not a multinational, not a foreign company “Nigerians indeed have the capacity to think through, and what is happening is that most of the research and development costs are usually funded from activity. As for that, we will follow and that is already happening.”

The PETAN boss also believes that Nigerians are unique when compared with other oil producing countries. “Nigeria and Nigerians in the oil and gas industry are unique. They are unique in the sense that we’ve had the fastest growth in terms of hands on ability to deliver services. There are local content models across the Middle East, but the local content models are simply an agency-type model. So once you set up an agency you can do business.

“However, in our own situation we have Nigerians who have made and are prepared to make investments to grow technical service companies from ground up. That is a significant difference because what we now see is that some Nigerian companies are already able to export these capability outside Nigeria.

“These are service companies that started in Nigeria and exported their business.  In that respect, Nigeria is unique. In all of Africa, it is difficult to find the kind of momentum of Nigerian entrepreneurs or technocrats in the oil and gas industry. It just does not exist.

“One of our members just built a deepwater theatre for training safety professionals. It is the only one in Africa. This is just a few examples of some of the things you are going to see at the offshore technology conference, OTC, in terms of the technology profile of Nigerian companies that are constantly growing from year to year,” he said.

He noted that there are yet untapped potential that indigenous companies can take advantage of to push up the country’s production in the petroleum sector.

According to him, indigenous players will not only boost production, they can also provide the much needed gas to boost power generation. He said for a nation that wants to develop its economy, it must pay more attention to the activities of indigenous oil producers by providing them with enabling environment to operate.

The Atlantic Energy boss is of the view that the role of indigenous producers cannot be overemphasized in the nation’s development, and reiterates that there are Nigerian solutions to every challenge that faces the nation. He cites gas flared or compressed as LNG for export as possible areas where indigenous potential could be harnessed, saying that as indigenous producers, they needed to capture the gas, transport it safely and economically to the domestic market for highly effective and reliable power.

On the issue of funding which is one of the major problems facing the industry, Aiken was of the view that fast-tracking solutions to deliver early results will further help provide the funds required for development, thereby reducing the over-reliance on bank loans.

Mr. Ayodele Oni, an energy law and policy expert and senior associate, Banwo & Ighodalo, a Lagos based law firm, said that in the last four years, there has been improvement in the participation of indigenous companies in the oil industry due to the implementation of the Nigerian Content Act.

“After four years, there have been modest achievements and an improvement in the overall Nigerian value addition to the oil and gas industry and certain Nigerian engineering and oil service companies have benefitted from it, as there has been an increase in the volume of in-country fabrication,” he said.

He explained that the first deepwater simulation theatre (DST) in Africa located in Port Harcourt, and commissioned in April, which was built by an indigenous oil servicing company, Tolmann Allied Services Company Ltd, lends credence to the evolving indigenous technology in the industry.

The Nigerian oil industry, which has been dominated by the IOCs in areas such as exploration and production, has seen Nigerian companies now owning more than 100 blocks across oil-producing regions in the country, and at least 30 marginal fields.

By the end of this year, the major divestments by IOCs since 2010, would have transferred about 5 billion barrels of oil and 20 trillion cubic feet (Tcf) of gas to indigenous players, said Austin Avuru, managing director, Seplat Petroleum Development Company.

“The Nigerian Content Act has done so well in the last four years as many Nigerians now play active roles in the oil industry,” Tunde Adelana, director, monitoring and evaluation, Nigeria Content Development and Monitoring Board (NCDMB) said.

“We are seeing fabrication projects, pressure vessels being built by Nigerian companies,” he said, adding that the NCDMB was working very hard to put in place formidable processes to help detect non-compliance and abuses.

For Emeka Okwuosa, Managing Director of Oilserv, indigenous companies have come of age and are competing favourably with their foreign counterparts. “Indigenous companies are now taking control of lucrative pipeline construction projects.

The competition is now between indigenous companies and their foreign counterparts.
For instance, the East-West Gas Pipeline project awarded to Oilserv was made possible because of the steady investment in capacity building, and the insistence of the Minister of Petroleum Resources that indigenous companies must be accorded due recognition in line with the Nigerian Content Act,” he said.

On the possibility of Nigerians sustaining indigenous technology that can stand them out in the industry, Mr. Barry Esimone, President of Crusteam, an energy and infrastructure group, believes that Nigerians can adopt a few and indigenise them.

“We can struggle to adopt a few and indigenise them especially in the area of process or drilling material technology. In doing this, we can beneficiate the local material to meet the requirement properties/ characteristics and can then patent such formula if it brings cost or efficiency advantage over imported ones.

The Raw Material Research Institute has been working on this area and may provide our niche in the industry,” he said.

Esimone also believes that technology development starts from Universities and are refined in research institutes. He however said that government should encourage the establishment of low technology based industries to accommodate the participation of the locals in the industry.