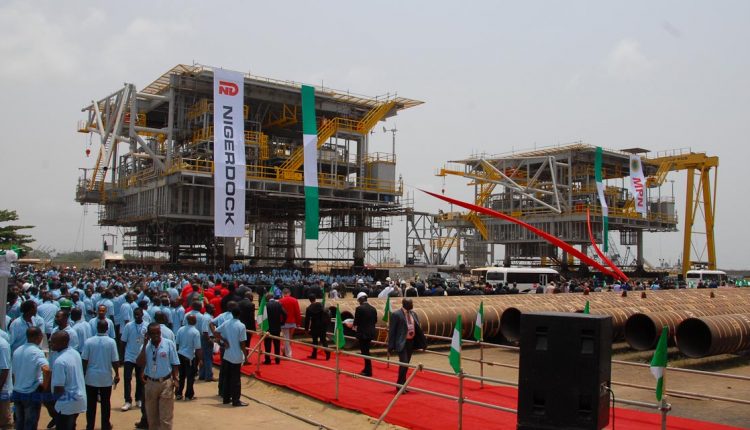 The successful implementation of the Nigerian Content Act is fundamental to the sustenance of national security because it engages thousands of citizens in productive activities and contributes significantly to the gross domestic product, the Executive Secretary, Nigerian Content Development and Monitoring Board, (NCDMB) Mr. Denzil Kentebe has said.

Delivering a lecture on Wednesday to the participants of Course 22 of the Nigerian Defense College in Abuja, the Executive Secretary described Nigerian Content as a national security imperative, noting that the Nigerian oil and gas industry must depend on Nigerian owned assets and personnel to avoid a scenario where the sector that generates 85 per cent of government revenue is forced to shut down because foreign owned assets or expatriates have to be withdrawn owing either to insecurity in the Gulf of Guinea Region, diplomatic tensions or break out of an epidemic in the country.

He regretted that the Nigerian oil and gas industry suffered capital flight in the region of $300bn in the first 50 years of operations, while 300,000 Nigerian jobs were exported to the detriment of the local economy. That era did not record the establishment of any legacy investment from major industry projects, rather little attention was paid to oil producing communities, forcing some persons to take to militancy, thereby cutting crude production output by one million barrels per day, he rued.

He added that over $5bn had been invested in the Nigerian oil and gas industry between 2010 to date in the establishment and upgrade of fabrication yards, acquisition of marine vessels, rigs and other assets by Nigerians and setting up of manufacturing facilities by original equipment manufacturers.

Other positive developments included the increased patronage of SCC pipe mill in Abuja by operating companies and ongoing arrangements to set up four new mills, emergence of several maintenance facilities for vessels and rigs, rise of indigenous players in the exploration and production sphere of the industry and inclusion of capacity development initiatives as major components of projects.

Expounding on the success of the policy, Kentebe stated that countries like Kenya, Gabon and Ghana had started to introduce local content regulations and the Board was supporting their efforts just as the Board had collaborated with the Ministry of Power and Ministry of Communications and Technology in developing their local content policies.

He expressed optimism that over $10bn would be invested in the Nigerian economy between 2015 and 2018 in new fabrication yards, floating, production, storage and offloading vessels integration yards, establishment of shipyards and dry docks supporting the construction and outfitting of marine vessels and support of indigenous companies venturing into deep-water exploration. Other expected investments within this period include the umbilicals and gas cylinders manufacturing facilities, establishment of Training Centers of Excellence (TCE), Research and Development Centers of Excellence, operation of Nigeria oil and gas parks to manufacture critical goods and promotion of youth empowerment programs targeted at 50,000 youths.

The Executive Secretary recalled that the Nigerian Content subsector and the security sector had cooperated in the past through the use of the Naval Dockyard in Lagos to construct security vessels that support the oil and gas sector, the use of the Naval Dockyard by Dormanlong Engineering to fabricate oil and gas structures and the utilization of Naval Base Warri by the Board for machinist training of young Nigerians.

He however, called for the deepening of such relationship, identifying possible areas of collaboration to include information sharing, inclusion of security personnel as members of the Essential Services Working Group of the Nigerian Content Consultative Forum (NCCF), local manufacture, assembly and maintenance of security equipment, software development and assembly of ICT hardware and production of security clothing.

Listing factors critical for improving Local Content and enhancing national security, Kentebe canvassed for Nigerian Content to be championed at the highest level of government and integrated into the national development agenda with various agencies of government collaborating.

He also harped on the need for improved infrastructure and fiscal incentives to attract new investments, aligning university curriculum to the needs of oil and gas sector so as to maintain a healthy pipeline of talents and integrating entrepreneurs from oil producing communities into oil and gas value chain in a bid to maintain the peaceful environment in those communities.