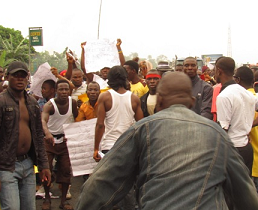 The victims of the spill that occurred 16 years ago between January 12 and 17, 1998, threw caution to the wind and barricaded the Mbiama end of the East-West Road for hours. The protesters who began their agitation early in the morning were there up to 10am – about five hours.

The development caused heavy traffic jam on the busy road that links all the states in the South-South. Drivers and travellers were held hostage for over five hours by the protesters who called for the intervention of President Goodluck Jonathan. Some of the placards read, “Chief James Jephta, we want our money”, “Exxon Mobil, you are playing games with us”, “Niger Delta people want 1998 oil spill compensation”, “Barrister Wills, Niger Delta youths want their money.”

The protest, which was peaceful, was coordinated by clan heads of the Ijaw Youth Council, Ijaw National Congress, Movement for the Survival of Ijaw Ethnic Nationalities and the Ijaw Survival Movement of the Niger Delta. Elderly men, women, youths and chiefs from various communities of Akwa Ibom, Bayelsa, Cross River, Delta, Edo, Ondo and Rivers states participated in the protest.

In a statement signed by leaders of the protesting communities and groups, the victims wondered why their situation was different, saying that coastal communities in Lagos State which suffered the same 1998 spill had since been paid their compensation.

Reading the statement on behalf of the victims, Mr. Jonathan Robert, said despite being the main victims of the spill, they had been left to languish in pains and penury 12 years after the incident. He said in pursuit of their compensation, the affected communities instituted various cases in different Federal High Courts against the oil company.

He, however, said after about eight years of litigation, the communities agreed an out-of-court settlement at the instance of ExxonMobil. Robert noted that the victims later employed the services of Octopus Clan Nigeria Limited owned by Mr. James Jephta as their principal attorneys to handle matters of the compensation on their behalf. He said after waiting in vain for over six years to get the compensation promised them by the company, they decided to confront the company to know the reason for the delay.

He said, “The mission yielded a great surprise. At a meeting of all stakeholders held with Mobil authorities at the office of the Director of Department of State Security in Uyo, Akwa Ibom State, Mobil said all due payments concerning the spillage of January 1998 had been duly settled and payment made to Octopus, the officially recognized principal attorneys of the claimants.

“Mobil also insisted that no information other than what they have told us could be released to us as pertained evidence of payment.” He, however, said all efforts by the victims to reach the legal firm and Jephta had been unsuccessful.