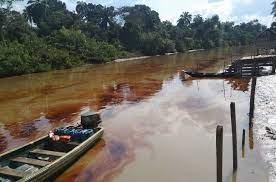 Bayelsa state government has said that it rejects the JIV report on the Nembe oil spill because it believes that the National Oil Spill and Response Agency, NOSDRA and Nigerian Upstream Petroleum Regulatory Commission, NUPRC were compromised in their findings.

The state government said NOSDRA and the other agencies, being independent and neutral as regulatory bodies, exhibited bias and had taken a premeditated position in favor of Aiteo against the interest of the people of the state and the Niger Delta region.

In a statement signed by the chairman Bayelsa state Technical Committee on Nembe Oil Spill, attorney general and commissioner for justice, Hon. Biriyai Dambo SAN and issued to newsmen in Yenagoa, the state government noted that while the combined team from NOSDRA and others, and even Aiteo claimed that the spillage was as a result of external human interference that is sabotage, the peoples of Bayelsa and the state government believe that the very accessories/instrument of the wellhead that were to be inspected, had been removed and replaced, which amounted to tampering with and concealing the equipment and evidence.

He pointed out that a similar incidents oil spill had occurred at the same Wellhead 1 OML 29 in 2018 and 2019 which Aiteo had previously admitted, but was taken aback to note that on the day of the latest JIV, when asked about these previous incidents at the same Wellhead, Aiteo denied and NOSDRA kept mum.

The statement reads: “The planned JIV on Friday, December 17, 2021 was not successful. This initial visit was botched because AITEO, using men of the Nigerian Navy, stopped a news correspondent from Arise News Television, who accompanied the Bayelsa state government delegation for the purpose of covering the event and ensuring transparency in the process.

“However, following the visit of the minister of state, federal ministry of the environment, Ms. Sharon Ikeazor, to the site of the spill, and subsequent meeting with the Bayelsa state Governor, Senator Douye Diri, on Monday, December 20, 2021, both parties agreed that another JIV be conducted on Wednesday, December 22, 2021.

“Therefore, another JIV was conducted on Wednesday, December 22, 2021 in the presence of representatives from NOSDRA, NUPRC, AITEO, Nembe local government Council, the host community, Bayelsa state ministry of environment, and the Bayelsa state government.

“At this JIV, representatives of Bayelsa state ministry of environment, Nembe local government council and the host community, on the one hand, found and declared the cause of the spillage to be equipment/maintenance failure, while the representatives of NOSDRA NUPRC and AITEO, on the other hand  had a different opinion. The contradicting positions were not resolved.

“Consequently, the Bayelsa state government delegation could not append their signatures on the NOSDRA Form for the JIV report, as NOSDRA insisted that only the box for indicating their opinion of the possible cause of spill could be ticked, and that there was no room for the state government to state its contrary finding.

“The Bayelsa state government/ministry of environment, Nembe local government council and the host community affected by the spill could not append signatures on the NOSDRA Form on the strength of the following reasons:

“While the combined team of NOSDRA, NUPRC and AITEO claimed that the spillage was caused by an external human interference with the oil wellhead i.e. sabotage, the representatives of Bayelsa State government/ministry of environment, Nembe local government council, and the affected host community, observed that the very accessories/instruments of the wellhead, that were to be inspected, had been removed and replaced, which amounted to tampering with and concealing the equipment and evidence.

“That there had been similar incidents of oil spillage, though of lesser magnitude, from the same Santa Barbara Wellhead 1 in OML 29 in 2018 and 2019, which Aiteo had previously admitted. Till date, there has been no remediation nor safeguards against future recurrence put in place or enforced by AITEO and NOSDRA respectively over the said spills, as demanded by the affected communities, until this major blowout happened in November 2021.

“We were shocked to note that on the day of this latest JIV, when asked about these previous incidents at the exact same wellhead, AITEO denied and NOSDRA kept silent.

“That during the course of the JIV, the behaviour and utterances of representatives of NOSDRA and NUPRC called to question their independence and neutrality. We are convinced that NOSDRA and NUPRC are biased and are playing a script in cahoots and concert with AITEO.

“We have very convincing evidence (which we will bring to light at the appropriate time and through the appropriate fora) that NOSDRA and NUPRC are completely biased and have taken a premeditated position in favour of AITEO against the interest of the people of Bayelsa state and the Niger Delta.

“This is terribly sad and unfortunate given the fact that NOSDRA and NUPRC are supposed to be regulators and as such should be unbiased and act at all times with integrity.

“The government of Bayelsa State completely rejects the JIV of Wednesday, December 22, 2021.”