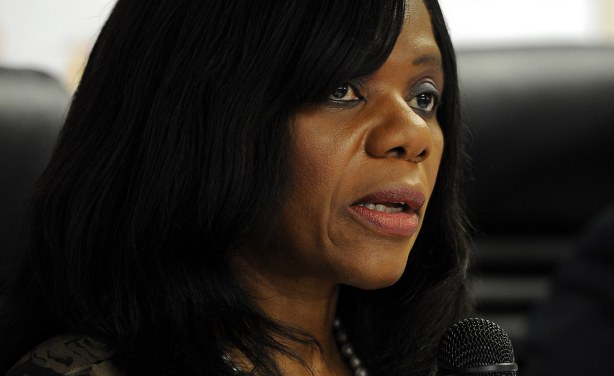 Guests at a Public Protector feedback session gasped when they heard that the R617.3m first deposited into a North West community mining royalties account in 1995 had dwindled to R721 000 by July this year.

The information was revealed on at a community briefing in Brits at one of Thuli Madonsela’s final tasks as she prepares to leave office.

Speaking through an interpreter, Madonsela said the R617m initially deposited was made up of R392m in deposits by Lonmin and other businesses, and R224m in interest.

Her office has been investigating what happened to the Bapo-Ba-Mogale community’s collective resources in its “D” account after the community wanted to know where the money went, what it was spent on, who authorised the spending and who the beneficiaries were.

They also wanted the alleged abuse of resources relating to the construction of Kgosi Mogale’s palace to be investigated.

Madonsela’s office explained earlier in a statement that the money generated for the “D” account is controlled by the Department of Co-operative Governance and Traditional affairs but there was nobody overseeing it.

In 2014, the community stopped using the account, preferring a newly established investment wing for its resources.

Since then, about R40m in royalties was received, but most of it was used for administrative purposes.

Recently, Madonsela said a further R40m came in, but R100m was borrowed from the Public Investment Corporation, leaving the account in debt.

In the previous briefing in July, she said that over the past 20 years, the North West government was accountable for the expenditure of R617m in the account, paying suppliers directly for goods and services in line with a budget presented at the beginning of each year.

The biggest amount spent, said the Public Protector in July, was on the building of the palace.

A final report is not yet ready for the anxious community because the investigator has to check invoices and expenditure against what was delivered, and to whom. A quantity surveyor is also involved in these checks.

This means the report will only be available by December, or at the latest, January.
In the meantime, she urged the community not to accuse anybody of anything until there were definite answers.

“We don’t want to point fingers at people because of suspicion. Whatever we say will be backed by documents and prices charged to the palace,” she said.

“In the meantime we are asking you to stop accusing each other of any theft, of any wrongdoing.”