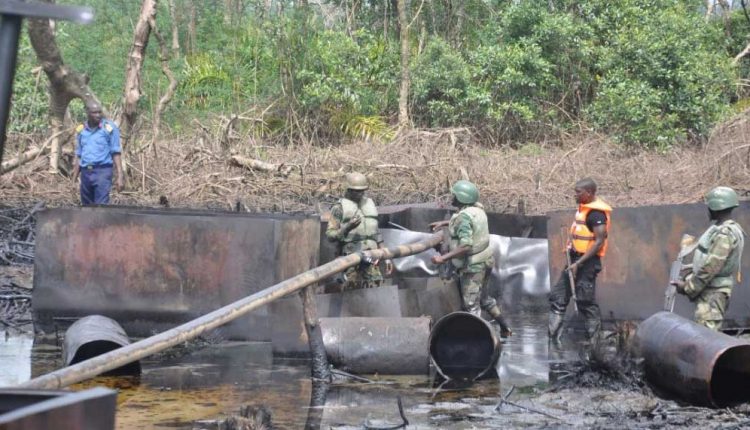 The head of the joint military taskforce operating in the Niger Delta, Operation Delta Safe, has said no fewer than 300 illegal refineries and 156 boats have been destroyed in an ongoing crackdown in the region.

The Commander of the taskforce, Rear Admiral Apochi Suleiman, who disclosed this to journalists on Wednesday at the Nigerian Navy Ship (NNS), Warri Naval base, said that a suspected militant and member of a “kill and bury” gang identified as Gift Apollo, who allegedly killed a soldier in August was also apprehended during the operations.

Suleiman said that the operation tagged ‘Operation 777’ was launched by the Chief of Defence Staff, Gen. Abayomi Olonisakin on October 10 and executed by the taskforce.

He explained Operation 777 was to further reinvigorate the operations of the taskforce to disrupt activities of the criminal elements ahead of the yuletide and the 2019 general elections.

Suleiman said the operation had made remarkable achievement in meeting its objectives.

He said, “Cases of illegal bunkering, pipeline vandalism and associated criminalities do increase during major festivities and election years.

“This necessitated the launching of Operation 777 by the CDS and activated by the OPDS.

“The Operation 777 has made huge achievement as over 300 illegal refineries, 156 locally manufactured boats, 1,085 surface tanks have been destroyed.

“It is also worthy to mention that six different types of arms and over 100 items of munitions were recovered during the period in focus.

“Importantly, a wanted militant and member of `kill and bury’ gang named Gift Apollo was arrested during the operations.

“The group was responsible for the attack and death of our soldier deployed in Abua/Odua sometime in August,” he said.

Suleiman said that the taskforce also conducted anti-illegal bunkering/anti-illegal refining operations at Okaki community in Bayelsa in which over 100 reservoirs and an estimated 210 metric tonnes of Automated Gasoline Oil (AGO) were destroyed.

He also said that the JTF rescued seven Nigerians maintenance workers of Agip Oil Company who were kidnapped by gunmen on October 5 in Azuzuma Local Government Area of Bayelsa.