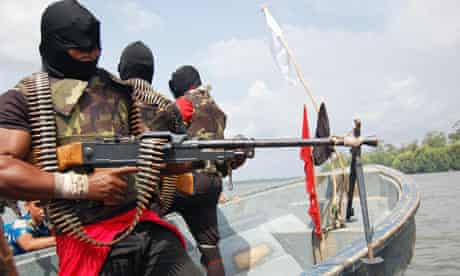 Militants in the Nigeria’s Niger Delta region appear to have retuned full swing; and the gunmen are clearly making real their promise to return, as they intercepted a Conoil party last Monday, abducting an operative of the Nigeria Security and Civil Defense Corps (NSCDC) and four contract staff working at the Conoil field in Koluama 1 in Bayelsa.

The latest strike came one week after 4 oil workers who were involved in pipeline maintenance owned by the Nigerian Agip Oil Company were killed by yet to be identified gunmen.

Quoting a spokesman for the NSCDC on Monday, the News Agency of Nigeria said the five victims were kidnapped while on their way to Koluama 1 in Southern Ijaw Local Government Area.

The report stated that four contract staff that were kidnapped are employees of a catering contractor to Conoil, along with seized supplies from Yenagoa for the personnel at Conoil location in Koluama 1.

A family source to one of the abducted oil workers told NAN on Monday that the abductors had contacted the family, demanding N25 million ransom.

Spokesman of the NSCDC in Bayelsa, Solomon Ogbere, said “I can confirm that we are in receipt of the report of kidnap. One of our officers and four civilians were kidnapped while heading to their location where they protect Conoil facilities.

“They were all in mufti while returning to their base when they were attacked. Investigation is ongoing to track down the culprits,” he said.

Madagascar gets €4m from African Dvt Fund for Sahofika…

The state government had imposed a curfew and banned the use of speed boats with 200 Horse Power Engines on all waterways in the state.

The rising piracy incidents in the state is a troubling trend as it was reported last week that gunmen suspected to be pirates have killed 4 oil workers who were involved in pipeline maintenance owned by the Nigerian Agip Oil Company.

Also last month, the Danish military reported that a frigate ship killed four pirates on Southern Nigerian waters, off the Gulf of Guinea.