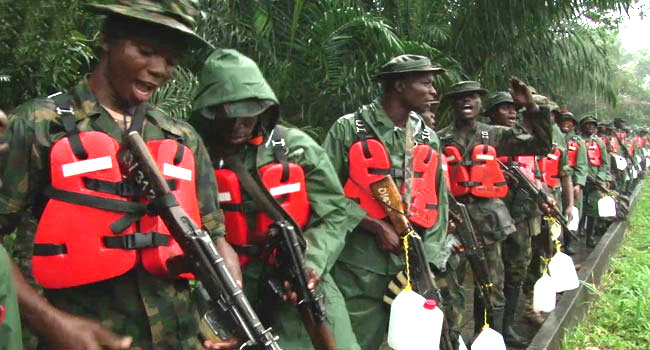 The Joint Task Force (JTF), also called Operation Delta Safe, has revealed that 13 ships laden with crude cargo were seized, while 567 suspected oil thieves were arrested between January 2021 and December 2021.

In a statement issued by the South South of Nigeria based Joint Task Force, and signed by the Commander of the group, JTF in the South South, Rear Admiral Aminu Hassan, the security group said, among others, that Operation of Delta Safe is committed to protecting oil and gas facilities in the year 2022.

Hassan listed some of the feats achieved in the 2021 to include the destruction of 1,423 illegal refining sites with over 4,929 storage facilities. The task for commander also revealed that 536 large wooden boats known in local parlance as Cotonou boats loaded with illegally refined products and crude and 137 trucks and other types of vehicles used in conveying illegally refined product were seized.

He informed further that within the year under review, some 40 million litres of crude, 67 million litres of illegally refined products, mainly diesel, were recovered from oil thieves and pipeline vandals during anti-crude oil theft operations in the region.

All the suspected oil thieves, Hassan revealed further, have been handed over to the appropriate prosecuting agencies form needful prosecution according to the law. He also informed that some convictions have been recorded while quite a number of them are awaiting trials.

The joint task force commander said that his men successfully raided and destroyed 51 militants/pirates camps where hostages taken from kidnap incidents were kept while 153 assorted weapons and ammunition of various calibers were recovered from the criminals.

According to him, while the Nigerian Navy is tackling piracy at the high seas within Nigerian territorial waters, the JTF is doing same in the backwaters, a development that has drastically reduced the incidence of the maritime crime.

He noted that data from the International Maritime Bureau indicated that reported piracy cases dropped to 28 as of Oct 2021, from 46 reported in the same period in 2020 adding that only four cases were linked to Nigeria.

The Commander however attributed the feats to the support of Nigeria’s chief of defence staff, General Leo Irabor, the Service Chiefs and other heads of security agencies who contribute staff to the joint force, and who also made funding available for the operations.

Marking the End of An Era: OPEC Secretary General Barkindo Served with Distinction