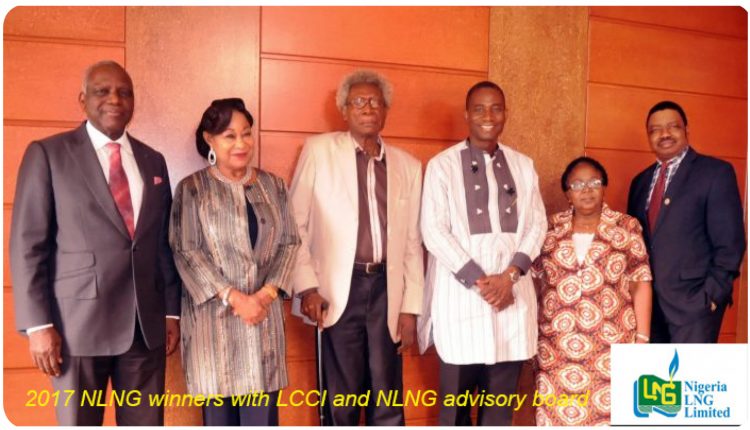 Joint winners of 2017 Nigeria Prize for Science speak about their works at an interactive workshop organised by Nigeria Liquefied Natural Gas and Lagos Chamber of Commerce and Industry to mark World Malaria Day
THE statistics is shocking and unbelievable. More than 200,000 Nigerians die of malaria every year. This means that malaria kills more Nigerians than the dreaded acquired immune deficiency syndrome, AIDS, disease which claims the lives of 160,000 people every year in the country. Nike Akande, member advisory board for the Nigeria Prize for Science reeled out the figure while commenting on the need for collaborative effort to fight malaria. Akande spoke at the interactive workshop with 2017 winners of the Nigerian Prize for Science on innovation in malaria control aimed at bringing the disease to the limelight as the world marks Malaria Day on April 25. The workshop was organised by the Nigeria Liquefied Natural Gas, NLNG, in partnership with the medical and pharmaceutical members of Lagos Chamber of Commerce and Industry, LCCI, in Lagos on April 24.
In his welcome address, Babatunde Ruwase, president of LCCI, said that the workshop was to create awareness on malaria in Nigeria and across the globe. Ruwase, who was represented by Toki Mabogunje, deputy-president, Lagos, Chamber of Commerce and Industry, said that World Health Organization, WHO, statistics of 2016 on malaria showed that Africa accounts for 407,000 death cases out of the 445,000 in the globe. Consequently, the LCCI president urged African leaders to show more commitment to the fight against malaria. He advocated for private sector participation and funding as government and global agencies could not do it alone.
“I challenged all to give their supports in every way possible to fasten better stakeholder engagement towards getting more funding for the fight against malaria in Nigeria,”
Ruwase said, adding that the chamber would remain committed to combating the disease in Nigeria. Alfred Akpoveta Susu, emeritus professor of Chemical Engineering and the chairman advisory board of the Nigerian Prize for Science, said that the essence of the workshop was to support the attainment of a malaria-free and healthy population that would deliver the innovations and productivity needed to develop the country. He praised NLNG for helping to build a better Nigeria through promotion of science and literary works.
Susu, who alongside Kingsley Abhulimen, won the maiden NLNG Prize for Science in 2004, said that Nigerian scientists all over the world heeded the wakeup call to demonstrate ingenuity in functional works. He said that $100,000 prize by NLNG to scientists and researchers from any part of the world are to help find solutions to problem in Nigeria. He described NLNG as a pacesetter and expressed surprise that other industrial giants in Nigeria are yet to join NLNG in promoting researches and scientific breakthrough. He announced that 2018 competition will be focusing on “Innovations in Electric Power Solutions” as the “Nigeria LNG and the advisory board for the science prize have set out to find solutions to our power problems through scientific research works.”
According to Akande, the partnership between NLNG and LCCI will endure and become an inspiration to Nigeria on what could be produced when resources are pooled together for common good. She condemned the poor attention given to malaria by Africans even when the scourge is felt more in the continent and wondered why foreigners are in the fore front to curb it. Akande, who was LCCI past president and former minister of industry, said that other organisations should take a cue from NLNG and contribute their own quota to the scientific and technological resolution of the many problems that confront Nigeria. The workshop was fruitful as joint winners for 2017 NLNG Prize for Science spoke on their innovations and continuing efforts to eradicate malaria in Nigeria and the world.
Chukwuma Agubata, lecturer at University of Nigeria and a joint winner with his work entitled: “Novel Lipid Microparticles for Effective Delivery of Artemether Antimalarial Drug Using a Locally-sourced Irvingia Fat from Nuts of Irvingia gabonensis var excelsa (Ogbono)”, explained how fat extracted from irvingia helped in the efficacy of malaria drug. He urged government, individuals and organizations to assist him to commercialise the product for the benefit of Nigeria and Africa.
Also, Olugbenga Mokuola, a lecturer at the University of Ilorin and a joint winner with his work entitled: “Multifaceted Efforts at Malaria Control in Research: Management of Malaria of Various Grades and Mapping Artemisinin Resistance” explained the efforts he is making to ensure that artemisinin is effective for malaria. The professor of paediatrics said that he has inaugurated annual malaria lecture in the university to keep the world informed with recorded success. He advised that malaria could not be diagnosed by feelings but by testing, adding that there is a national guideline on treatment of malaria and diagnosis. Answering question from a participant on the best way to minimise fake drugs, Mokuola said that cheap and genuine drugs would solve it, urging the private sector to make it realisable. Bidemi Yusuf, also a joint winner alongside her group- Ikeoluwapo Ajayi and Ayodele Jegede – spoke about their work entitled “Improving Home and Community Management of Malaria: Providing the Evidence Base. Indeed, it was an interactive workshop as participants pledged to join hands to fight malaria.
Courtesy: Reelnewsmagazine.net