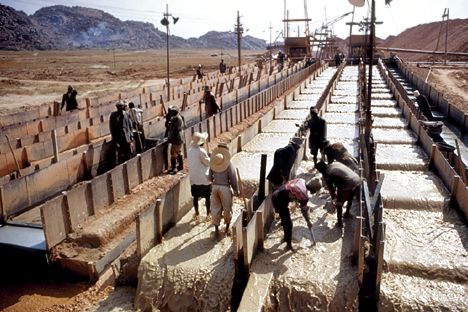 How Solid Minerals Can Lift Nigeria’s Earnings By $50bn

Nigeria stands to earn about $50 billion from her abundant solid minerals if the necessary framework is put in place to harness the resources.

Indeed, the nation has been estimated to possess over 400 solid minerals, 40 of them available in commercial quantities, though only 13 of these are being exploited at present.

This is believed to have dragged down the sector’s contribution to the national economy to a paltry 0.3 per cent and generating about $1.5 billion into the country’s coffers.

A document obtained from Solid Mines Limited, showed that the sector could add as much as $50 billion to the nation’s Gross Domestic Product (GDP) by climbing from 0.3 per cent to 10 per cent growth in the next three to five years, if the necessary investment is made.

Besides, optimal utilisation of the solid minerals could also create over one million direct and indirect jobs within Nigeria and far increase Africa’s inter-trade activity, which currently stands at $110 billion.

The document stated in part: “The under-development of the mineral sector has resulted in Nigeria importing minerals that can be locally produced thus missing out on the opportunity to increase local output, earn foreign exchange and create jobs. Over 40 solid minerals have been discovered in commercial quantities in Nigeria.

However, only small numbers of these are currently being mined mostly by artisans and small scale miners (ASMs) also known as informal miners who have their activities curtailed by poor funding, lack of equipment and poor training,” it stated.

Nigeria Rolls Out Guidelines for Operations of Downstream…

The group, therefore, noted that the government must create an enabling environment to stimulate local and foreign investment by establishing new mining codes.

Besides, it said that the private sector has an obligation to invest, adding that it must regard itself as the primary means of raising finance for mine development and also consider it important to give back to the community the infrastructure projects.

The Ministry of Mines and Steel Development had in 2005 begun the mining sector reform process based on international best practices which changes the government’s role from ‘Owner-Operator’ to ‘Administrator-Regulator’ and positions the private sector to drive growth, capacity development and generation for the sector.

Challenges facing the sector include poor funding, low infrastructure development level, social and political instability and illegal mining among others.

For the nation to completely overhaul the sector and develop a policy framework that would drive the desired growth in the sector, the Solid Mines Limited is collaborating with the Strategic Global Partners to hold Africa Mining Conference 2015 slated for October 21 at the Transcorp Hilton Hotel, Abuja.

The conference with the theme, “Harnessing the Continent’s Solid Minerals for Economic Buoyancy through Sustainable Public-Private Sector Synergy”, is expected to dissect issues with particular references to artisanal mining and the environmental impact of illegal mining.

The Director and Chief Executive Officer, Solid Mines Limited, Frank Ekperigin, in a statement said, “the incidences of lead poisoning in Zamfara State and most recently in Niger State among other unfortunate occurrences have necessitated the action to convene and document a further sustainable and implementable  framework for the mining industry going forward in this new administration,”

Ekperigin noted that the $1.5 billion annually is negligible in comparison to other African countries such as

South Africa, Democratic Republic of Congo and Botswana whose sectors record 18 per cent, 25 per cent and 40 per cent of the country’s GDP equating to $63 billion, $7.6 billion and $5.9 billion respectively.