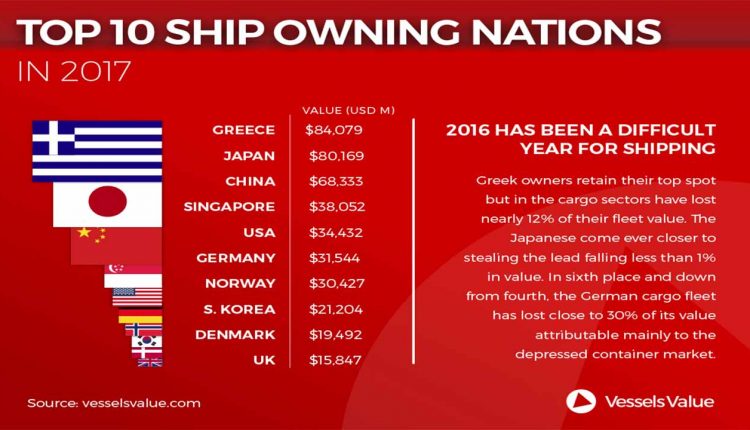 Greece, Japan and China take the lead in investments of about $423.6 million among top 10 ship-owning countries in 2017, according to latest ranking released by Vessels Value.

The development comes as Nigeria; Africa’s biggest economy struggles to join the league of leading global shipping countries with the establishment of a new national carrier.

The proposal by the Federal Government to fly the Nigerian flag on the new national shipping is, however, faced with a number of bottlenecks hindering its realisation. But government is determined to go through with the plan, which is expected to be private sector-led.

But the Minster for Transportation, Rotimi Amaechi recently said that when established, the new carrier is expected “to address multiple challenges in the shipping industry such as check capital flight, create more employment opportunities for the youth, provide opportunities for sea time training of graduate cadets as well as enforce resurgence in the ship building and repairs sub-sector of shipping,”

The top three bulker owning nations; Greece, Japan and China, have seen their fleets rise by $4 billion each, while the German container fleet shrunk by nearly $11 billion in 2016 after large losses in the sector.
The largest softening was experienced in the Panama and post-panamax sector with some vessels losing up to 60 per cent of their value Greek tanker owners started 2016 earning more than $100,000 per day on their vessels. However, the rest of the year has been predominantly bearish. By the end of 2016, the Greek fleet had shrunk by close to $11 billion. Coming in second was USA whose fleet lost $4 billion, less than of the Greek losses.