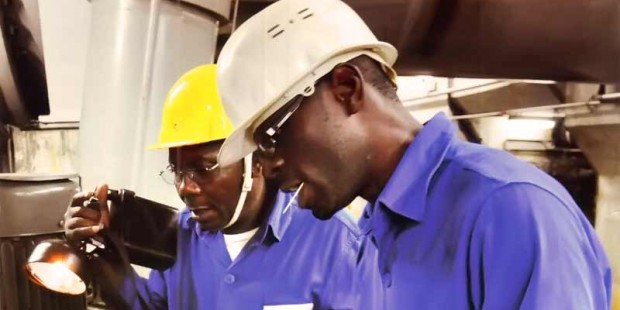 “Ghanaians constitute over 70percent of the total employees in the oil and gas industry in Ghana,” disclosed Mr. Kwaku Boateng, Director of Special Services at the Petroleum Commission, in an exclusive interview with Orient Energy Review.

Speaking on the compliance level of the local content law so far, he pointed out that if you look at the overall employment levels across the key companies, the key operators and the key service providers that employs; overwhelming majority of Ghanaians are employed in the industry as compared to the expatriates.

He said in terms of the targets set in the Local Content Law for employment, the country has generally exceeded the target set.

Giving a breakdown to support his over 70percent assertion, Mr. Kwaku Boateng, pointed out that in terms of managerial staff the ratio of Ghanaians as against foreigners is almost 50-50; but with middle level skills and semi skills job it is almost over 90percent Ghanaians.

“If you look at the target on average when all these companies started and compared it to this particular time of their operations in Ghana, and you look at the employment percentage between Ghanaians and expatriates and the target set in the LI (Legislative Instrument) you can see that on the average on employment we have quiet achieve our target,” he noted.

The Commission intends to extend this feat through the creation of a database of prospective Ghanaian professional employees to ensure that as much as possible all positions in the upstream sector in the oil and gas industry are occupied by Ghanaians.

So far the Commission has worked with the Universities, the technical institutions and also various professional bodies to compile the database, which is updated every time new CVs are available. The idea is that this database will be made available to the oil and gas companies that intend to do recruitments as their first point of call.

The database is also to prevent the perennial excuses given by oil companies that they cannot find qualified Ghanaians to occupy positions that have been filled by expatriates.

Another objective of the law that is on course is the patronage of Ghanaian goods and services.

“For the goods and services that we have the capacity to provide to a large extent the operators and service providers procure from Ghanaian companies.

As of 2014, the total contract awarded to indigenous Ghanaian companies is $600million as compared to the previous four years, which was even less than half of this amount.

This year alone, between the last quarter of last year for the whole CTP development alone (Sankofa and GyeNyame), figures available to us indicate that about almost $1billion worth of contracts have been awarded to indigenous Ghanaian companies out of the total spent of over $5billion, which clearly shows that there is a progressive increase in in-country spent,” he added.

This is why we want to assess the spending chain as to how much was actually spent on indigenous Ghanaian goods and services”.

Another plus for the compliance of the local content law is the increase in Ghanaians participation by equity holding in the industry. The Commission strongly believes that if the oil and gas industry should be a catalyst for economic development, then Ghanaians should play a major role in the industry. And one way this can be done is through Ghanaian participation, ownership, and management of the industry.

Currently the Commission is vigorously insisting that any foreign company that intends to provide any goods and services for the industry must form a Joint Venture (JV) with a Ghanaian company as enshrined in the local content law.

“Since the law became effective in February 2014 if you want to get a contract you must first form a JV. The good thing about JVs is that it affords the locals the opportunity to be part of the management of the company, to own part of the industry and also earn revenue through the payment of dividends. It also helps them to develop their technology and skills.

We are very gratified to say that all the major oil companies have now formed JVs or are now forming JVs,” he said.

But what is the Commission doing to guard against fronting?

Mr. Boateng emphasized that the Commission takes an exception to fronting and frowns on it any form. The local content law makes fronting a criminal offence punishable by sentence and or fine.

He admitted that there is the tendency for some Ghanaians to connive with foreign individuals or companies to deceive the Commission.

Though he acknowledged that it is not an easy thing to prove fronting, he indicated the Commission’s preparedness to do due diligence on the matter to fish out perpetrators and bring them to book.

Also as part of measures to curb the threat the Commission has developed a guideline for forming a JV.

“This guideline has come out with certain criteria that any JV company should meet. We also request a lot of documentations including the shareholders resolution, the board resolution, the dividend policy, company’s regulations, the signed agreements, and even for the company to show how profit and loss will be shared.

We demand audit accounts of the partners, a document showing the role and responsibilities of the foreign company and that of the local company in the management of the organization and the execution of any project they are undertaking.

We investigate their organogram to know those occupying the various positions, and also review the board to know who actually takes the high level decisions.

We have put all these measures in place to ensure that the Commission receives adequate information and documentation to convince ourselves that the Ghanaian partner is not only a passive partner who will be sitting in his bedroom and collecting rent, but actually take part in the running of the business and build his capacity.

All future or new JVs will only be cleared if they meet all the requirement of the guidelines. For the existing JVs, the guidelines will serve as the basis to investigate them to make sure that they conform to the requirement. If we find any evidence of fronting by any individual we will prosecute,” he pointed out.

PIAC to Be Adequately Funded