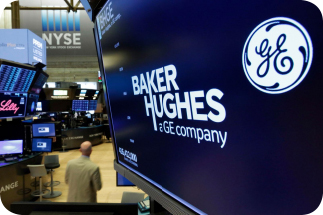 General Electrico said on Tuesday it will spin off its healthcare business and divest its stake in oil-services firm Baker Hughes, effectively breaking up the 126-year-old conglomerate which was once the most valuable U.S. corporation and a global symbol of American business power.
The slimmed-down company will focus on jet engines, power plants and renewable energy, which GE hopes will reward battered shareholders who have seen the stock lose more than half its value over the past 20 years.
‘This is really the culmination of 10 years of observations I’ve had about the company,’ said Chief Executive John Flannery, a GE veteran who took the helm in August with a mandate to revamp the company. Flannery’s comments came on a conference call with investors and analysts.
The company will spin off the profitable healthcare unit over the next 12 to 18 months, and sell its Baker Hughes stake over two to three years.
GE will likely either need to hold an initial public offering of Baker Hughes, organise numerous block trades of shares to institutional investors, or find an entirely new investor to acquire its holding since the only two strategic buyers of its stake, Schlumberger and Halliburton, would have major antitrust risks in the oilfield services market, analysts said.
*Energypedia.com

No Oil Found in Bida Basin Yet – Baru