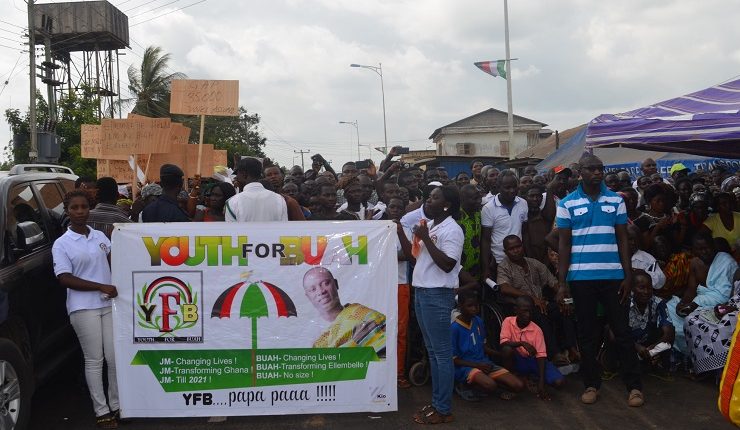 The people of Ellembelle, a constituency in Nzema affirmed their support for the President, His Excellency John Dramani Mahama and the National Democratic Congress (NDC) in the upcoming elections. This revelation came to light when constituents came out in their numbers to meet the President at Ayinasi, a suburb of Ellembelle during the President’s 3 days “Accounting to the People” tour in the Western region.

Speaking to the crowd, President Mahama commended the chiefs and people for their support, adding that he was in the area to inspect the 94km road that links Ayinasi to Prestea. Upon completion, the road network will save people from travelling 210km before getting to Prestea, hence aiding traders and others to conduct their businesses with ease. The President further stated that, three thousand jobs will be created in the area when the Atuabo Free Port is completed.

Member of Parliament for Ellembelle, Hon. Emmanuel Armah-Kofi Buah popularly known in his constituency as “Action Man”, thanked the President for various developmental projects and investment in the entire Nzemaland such as construction and expansion of roads, expansion of electricity to remote areas, providing constituents with clean water, construction of CHIP Compounds and schools, creation of jobs and many more. Hon. Buah further stated that because of these projects, Ellembelle has undergone major transformation under the leadership of President Mahama.

The President’s visit forms part of his objective to spend more time and interact with fellow Ghanaians in all parts of the country. The President also used the opportunity to interact with the chiefs, leaders and public officials in the various communities he visited.