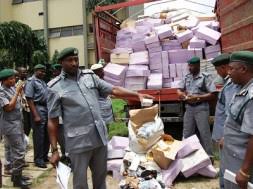 For the several use of trucks belonging to the Nigerian Breweries PlC for conveying of smuggled bags of foreign rice, the Federal Operations Unit (FOU) Zone A of the Nigerian Customs Service (NCS) has vowed to investigate the company’s involvement.

This is even as the unit said it has once again intercepted a truck belonging to Nigeria Breweries conveying crates of drinks with smuggled bags of rice tucked in it.

This arrest is coming one month after the unit intercepted 163 bags of rice concealed in crates of beer in a truck belonging to the company.

Speaking at a press briefing in Lagos on Wednesday, the Customs Area Controller Of the unit, Comptroller Mohammed Uba said, “We will investigate the incessant use of the Nigerian Breweries trucks to smuggle rice into the country. We will be fair to the company, we will invite them to give their side of the story.

Meanwhile, Uba had earlier advised corporate organisations to be wary of drivers who may have ulterior motives than their job description.

“My advice and warning to individual and private organization employing drivers and other workers using their mobility to convey their goods is that they should look at the credibility of such employees because they can dent the image of the company and slow down the process of making their gains,” he said.

In the same vein, the unit said it intercepted nine trailers load of smuggled rice of about 5,516 bags and recovered N1.039 billion for the Federal Government.

According to the Unit, it t also seized 30 exotic vehicles, 1068 cartons of frozen poultry products, 216 jerrycans of vegetable oil, 683 pieces of used tyres and sacks of Indian Hemp.

According to Uba, “Having deepened our anti-smuggling operations between April 10th to May 15, 2018, we have intercepted various contrabands and other goods on detention with a duty paid value (DPV) of N1.10billion.

“The unit through its interventions also recovered N29 million from under-payments making a cumulative of N1.39billion within the weeks under review.

The FOU Zone CAC also noted at the press briefing that two containers were seized for alleged false declarations and N25million recovered from the importers.

The CAC also read riot act as smugglers saying the unit will make the zone unfavourable for them.

“We will continue to make this zone uncomfortable for smugglers to operate and urge every Nigerian to be patriotic and report any smuggling activities in their areas to the Service and any intelligence provided will be treated in confidence.

“Let me advise these economic saboteurs as well as fraudulent importers to invest their resources towards legitimate trade and desist from engaging in smuggling activities, as the Service and indeed the Unit will not renege on our statutory functions most especially in suppressing smuggling,” he added.