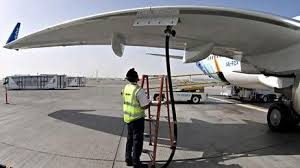 Following the recent closure of Nigerian’s airports, being fallout of the Covid19 lockdown, midterm reports from some of the aviation sector operators in Nigeria gives no cheer.

While a number of the aviation fuel suppliers are counting their losses, their airline counterparts are not cheering.

Total Nigeria Plc and MRS Oil Nigeria Plc, recorded that their combined aviation fuel revenue for the period ended June 30 declined by N9.6 billion to N6.9 billion from N16.5 billion in the first half of 2019.

The total revenue generated by two of the major oil marketing companies in the country from the sale of aviation fuel plunged by 58.1% in the first half of the year, compared with the same period of 2019.

The airports were closed on March 23 to enable the authorities manage the surging COVID-19 pandemic in Nigeria.

The unaudited financial statements of both companies listed on the Nigerian Stock Exchange showed that they suffered a significant decline in profitability partly as a result of the grounding of commercial flights for over three months.

Aviation fuel sales revenue accounted for seven per cent of MRS Oil Nigeria’s total revenue in H1 2020, down from 10% in the same period of 2019.

Nigeria’s aviation sector is one of the sectors whose fortunes have been heavily affected by the COVID-19 pandemic. As a result of the global lockdown there have been job losses and pay cuts.

Recently, over 70 pilots were sacked by Air Peace while Bristow Helicopters fired over 100 pilots and engineers.

The Nigerian Aviation Handling Company Plc is not left out. The ground handling company recorded a loss after tax of N143 million for H1 2020, as against a profit after tax of N467 million in the corresponding period of 2019.

US Crude Oil Imports From Nigerian Fall by 11.67m Barrels