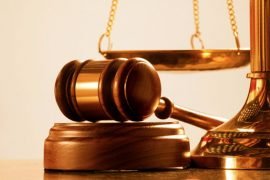 The Federal High Court sitting in Port Harcourt, has adjourned the case filed by Ogoni Youth Federation, OYF, against the Hydrocarbon Pollution Remediation Project, HYPREP, and the Federal Ministry of Environment, over $10 million Ogoni clean-up funds, to January 22, 2019.

Recall that OYF had gone to court to get HYPREP and the Federal Ministry of Environment to furnish the group with the details of expenditure so far on the $10 million initially released to HYPREP by Shell and its joint venture partners for the implementation of the clean-up of Ogoniland.

The group had summon the Coordinator of HYPREP, Dr. Marvin Dekil, to appear before the court over the management and administration of $10 million as well as the continuous delay in the commencement of the clean up exercise.
The court had in October granted an ex parte order to the group to file and serve writ of summons for judicial review to the first, second and third defendants (HYPREP, Dr Marvin Dekil and the Federal Ministry of Environment).

When the matter came up in court on Monday, the presiding judge, Justice E. A. Obile,  adjourned the case to January 22, 2019, for further mention following the absence of the counsel to HYPREP in court.
However, President of OYF, Mr. Legborsi Yaamabana, said following several ignored letters by the group to HYPREP and the Ministry of Environment requesting for details of the utilisation of the fund in line with the Freedom of Information Act, the group decided to approach the court for justice.

Yamaabana, speaking to newsmen after the court session, alleged that the management, administration and disbursement of the $10 million being managed by the Federal Ministry of Environment and HYPREP was shrouded in secrecy.

“Ogoni youths under the auspices of Ogoni Youths Federation have approached the Court to seek for accountability and transparency relating to the Ogoni remediation exercise.
“One of our prayers amongst others is information on how the $10million initial take off grant for Ogoni clean up exercise released to HYPREP was spent
“There has been a cacophony of voices surrounding that money and as peaceful youths, we have approached the court believing we will get justice,” he said.