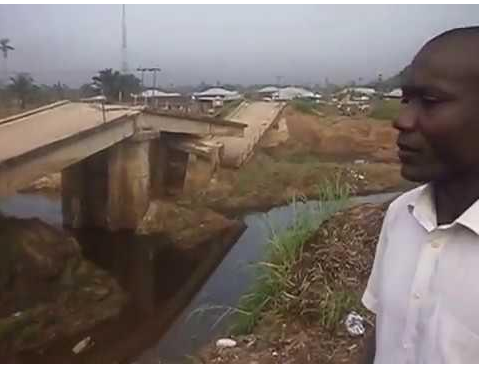 Residents of   Imiringi, oil and gas-rich community in Ogbia Local Government Area, Bayelsa State, have been separated from Yenagoa, the capital city and other sections of the state, following the inability of the state government to repair the bridge since it buckled during the 2012 flood disaster.

Sadly, residents of the serene but fast-growing settlement are not happy with what they described as the continued desertion of work on the collapsed bridge linking the community to the rest of the state. The locals built a makeshift wooden channel, popularly known as Monkey Bridge, across the creek to link the community, when the bridge built over four decades ago went bad and the long distance of the narrow SPDC iron bridge from the heart of the community.

The SPDC steel structure, community sources told a local newspapper, was built by the company to enable personnel access its many locations in the community.

The hope of the natives was, however, rekindled, when the state government intervened after the devastating flood and awarded contract for the construction of a new bridge across the creek.

But work on the project had since stopped with the contractor pulling out of site, following the drop in the state’s allocation from the Federation Account. Also, the temporary wooden structure is gradually decaying, threatened by the rising water level. Disturbed by the development, indigenes of the community have called on the state government to resume work.

Shell Bridge serves limited purpose A resident of the area, who simply identified himself as Gift, said: “We had thought that the second coming of the contractor to site sometime in 2015 would see to the completion of the project. But the unexpected recession came and the project was abandoned over alleged inability of the government to meet up its financial obligation.

The only link to the community presently is through a narrow steel bridge built several years ago by SPDC to enable its personnel access its numerous facilities in the area.” Another indigene, Grace, said: “Our people are mainly farmers and you do not expect us carry our farm produce and start going through the rigours of passing through the Shell bridge, which is far away from community, to access our homes.

“We have no choice than to construct this makeshift wooden bridge across the creek. We are not happy, as you can see the new bridge project awarded by the state government has been abandoned in spite of the contribution our community makes to the national and state coffers.” Also heartbroken by the plight of the community, a youth leader, Collins Enato, who recalled that one Pastor Ranami Afagha mobilised community folks, last year, to rehabilitate the temporary makeshift wooden structure pending when work resumes on the abandoned bridge project, said: ”We are appealing to the state government to hear the cry of our people and mobilise the contractor back to site.”

Renowned environmentalist, Alagoa Morris, also pleaded with the government to revisit the abandoned bridge project, saying, “the Imiringi Unity Bridge is one major project the whole community is looking up to the state government to do for them. “Even though the state government made some attempts at reconstructing this bridge that was destroyed by the great flood of 2012, the project site seemed abandoned for two years now.”