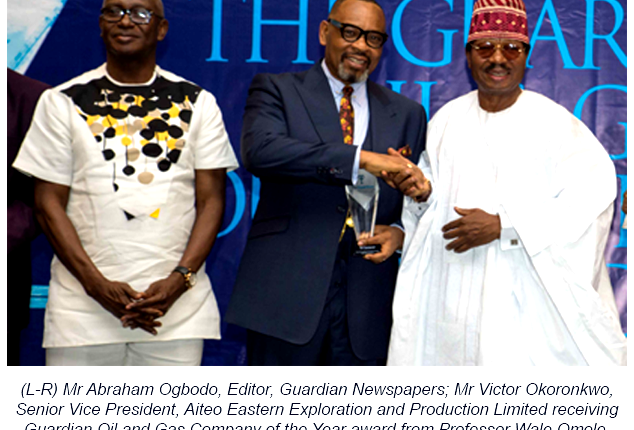 Nigerian energy giant, Aiteo group has emerged winner in three different categories at the Guardian Oil & Gas Roundtable and Awards, held on June 23, 2018 at the Eko Hotel & Suites, Victoria Island, Lagos. The Guardian Oil and Gas roundtable and awards aims to draw critical stakeholders together to discuss and present resolutions on issues affecting the Nigerian Energy sector. The event also recognises and celebrates institutions, organisations and personalities who have contributed and still contribute immensely to the growth and development of the Nigerian oil and gas industry. The Aiteo group was adjudged and awarded winner in the following categories: Oil & Gas CSR/Sustainability Company of the Year (Upstream), Oil and Gas Company of the Year (Upstream Indigenous) and Oil and Gas CEO of the Year (Upstream Indigenous).
According to Victor Okoronkwo, Aiteo’s Senior Vice President, the awards are a testimony to the organization’s commitment to adding value across the Spectrum of the Nigerian Energy milieu.
“In recent years, our value footprints have become more glaring on the Nigerian energy scene. These include strong commitment to local content, host community engagement, and Corporate Social Responsibility. We have also been a major active partner of the Nigerian Super Eagles.”
With a peak production capacity of 90,000 bpd, Aiteo is often called the largest indigenous oil company in Nigeria. It is the operating partner of the Oil Mining Lease(OML) 29, one of the largest offshore oil blocs in the Eastern Niger Delta. It is also the operating partner of the Nembe Creek Trunk Line(NCTL), a 115km long, 150,000bpd capacity oil delivery pipeline traversing over 100 indigenous autonomous communities between Rivers and Bayelsa States.
In the CSR arena, Aiteo has become the foremost financier of football in the country after a string of contributions to the Nigerian Football Federation (NFF). It began with a N2.5 billion 5-year deal with the NFF. To support local football, Aiteo took over the sponsorship of the Federation Cup, Nigeria’s oldest football tournament, now renamed Aiteo Cup. On the continental stage, Aiteo partnered with the Confederation of African Football (CAF) to sponsor the African Football Awards in January this year. Aiteo’s contributions also include incentives for the Super Eagles in form of financial reward of N18 million naira for every goal scored and unresponded by their opponents in the World Cup.