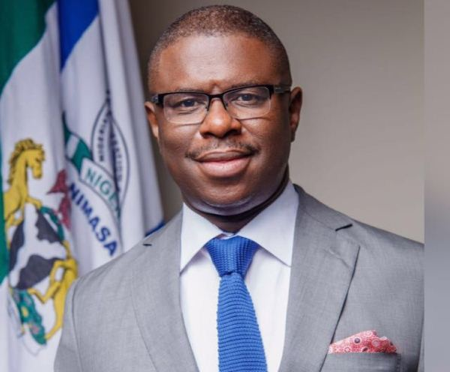 The third conference of the Association of African Maritime Administrations (AAMA) in Abuja, from April 19 to 21, 2017, may have come and gone, but the memories and takeaways from the occasion would be cherished by the regional and global maritime community for a long time to come.

A major development at the three-day event was the unanimous election of the Director-General of the Nigerian Maritime Administration and Safety Agency (NIMASA), Dr Dakuku Peterside, as the new chairman of AAMA. He took over from Sobantu Tilayi, the acting chief executive officer of the South African Maritime and Safety Agency (SAMSA), who has been the acting chairman since 2013. Peterside, who was immediately congratulated by President Muhammadu Buhari, pledged to reposition the industry for the good of Africans.

The AAMA programme, themed “Sustainable Use of Africa’s Oceans and Seas,” was hosted by NIMASA and saw various African maritime leaders and officials of the International Maritime Organisation (IMO) speak with one accord on how to reset the industry for the greater benefit of the continent.

From North to West Africa, East to Southern Africa, speaker after speaker harped on the need for the continent to explore and control its vast and untapped maritime resources.

It was unanimously agreed that Africans should wake from their self-induced slumber and marshal out strategies on how to snatch the lucrative shipping trade from non-Africans who control 95 per cent of the market.

The maritime delegates, drawn from 34 countries in Africa, listed challenges like poor financing of the sector, poor legislative and regulatory functions, weak intra-African cooperation and bureaucracy as blights that have robbed the continent of its rightful place on the global maritime map.

While pledging to implement the resolutions of the conference, the experts said it was appalling and unacceptable for Asians and Europeans to dominate the international shipping business, while millions of African youths wallow in poverty due to joblessness.

Delegates resolved that AAMA should immediately give operational effect to the African Union charter of maritime security, safety and development adopted by African heads of government in Lome, Togo, in 2016.

They also pledged to work out structured, inter-agency, inter-governmental regional and continental cooperation and integration on all maritime issues.

“We in Africa need to speak with one voice at the global level. That is the unity we are talking about. Africa boasts of enormous untapped maritime potential. We have a lot administrative, security and safety challenges but they are not insurmountable. Piracy, kidnapping and sea robbery are some of these challenges. These crimes have hiked insurance cost for vessels and goods. Our waters are being polluted. We have not acquired adequate human and material resources to tackle the issues. That is why a strong collaboration and synergy from the national to the regional levels are key.

“Back home in Nigeria, we have the Niger Delta issue and we are addressing that adequately. We are also addressing the issue of piracy and it has reduced in the last six months as we stepped up stakeholders’ engagement,” the Vice President said.

Osinbajo also disclosed that the Federal Government had approved a new maritime security architecture for the country, with NIMASA, Ministry of Transport and the National Security Adviser as key drivers.

“We are also giving the Nigerian Navy needed support to effectively police our waters to boost trade. We have also paid attention to better ways of doing business, especially with regard to easier entry and exit at the seaports,” he said.

The Vice President, while unveiling the new NIMASA logo, also announced that the agency was being reformed to play its role as an industry regulator. He emphasised the need to strengthen the agency’s coastguard functions.

The secretary-general of the IMO, Kitack Lim, represented by the head, Africa Technical Cooperation Division, IMO, William Azuh, said it was regrettable that there was no single African carrier among the 35 ship-owner countries that constitute 95 per cent of the global shipping trade.

According to him: “In a share of ownership by country grouping, developing countries in Africa own 1.23 per cent while their counterparts in Asia own 36.24 per cent. Africa represents 0.9 per cent of shipping yard and marine-related industries.”

Tilayi, at the event, called for unity of purpose and collaboration among African nations.

Nigeria’s Transport Minister, Chibuike Amaechi, while welcoming the delegates, assured them that Nigeria would contribute to the growth of the maritime sector in Africa by helping to tackle the challenges plaguing the industry.

“Now, we are experiencing low tonnage, piracy, unregulated fishing sector, environmental degradation and so on. Our waterways are underdeveloped and so we rely on foreigners. We don’t have coastguards. We need to strengthen the maritime industry. We need to build capacity in manpower and enforcement.

“Africa depends on imports from other countries carried by their vessels. These are despite our vast maritime resources. We need to change these and Nigeria will play a role in this.

“In Nigeria, we have a robust maritime surveillance and we are planning a national fleet. The federal government plans to disburse the Cabotage vessel financing fund to help local shippers acquire new fleet,” he said.

‘We have ratified 35 maritime conventions and attained 80 per cent in the International Ships and Ports Security (ISPS) Code.

“We can leverage on these and share information with other African nations. We can’t allow foreign partners chart ways for us. We must lead the way. We own the water and resources. We need to make profit from our seas”, Amaechi said.

He said: “We need to deepen intra-Africa shipping and fishing business. It’s worth 2bn euros. This will help Africa harness its economic potential. As legislators, we will keep churning out Acts to boost businesses in the country and beyond”, he said.

In his remarks at the event, the Senate President, represented by Senator Ibn Na’Alla said the National Assembly set up NIMASA, via an Act, to ensure better participation of Nigeria in maritime sector.

He described the maritime potential in Africa as vast and untapped, calling for local and international collaboration to harness them for job creation, revenue generation and other benefits.

At the end of the programme, Egypt emerged the next host country while South Africa retained the Secretariat.

‘We Are Set To Diversify Local Content beyond the Oil Sector’ – Hon. Ekon