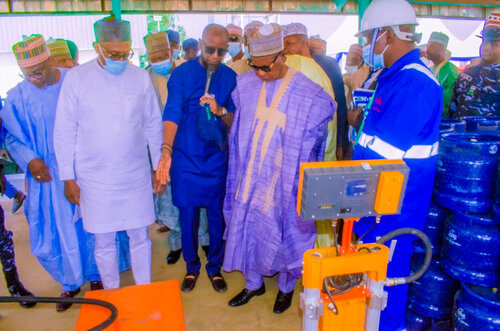 A 100metric tons, liquefied Petroleum Gas (LPG) Storage and Bottling Plant has opened in Kabukawa layout, Kastina state. The gas plant owned by Butane Energy Limited is one of the gas based investments supported with equity by the Nigerian Content Development and Monitoring Board (NCDMB).

The project was commissioned by the Kastina state governor, Alhaji Aminu Bello Masari as motivation of the promoters is to help address supply constraints in the domestic LPG market in the Northern part of Nigeria.

Commenting on the plant, the executive secretary of NCDMB, Engr. Simbi Kesiye Wabote, explained that the project in Kastina state is the first leg of its partnership with Butane Energy Limited with the other LPG bottling plants and depots to be rolled out in 2022.

According to him, Butane Energy’s LPG storage and bottling plants would come up in Abuja, Kano, Kaduna, Katsina, and Bauchi States while six depots would be located in Zamfara, Jigawa, Gombe, Plateau, Niger and Nasarawa states.

This, it intends to do, through its plant operations/bulk storage, transportation/ distribution, cylinder filling and bulk retail.

In his comments, minister of state for Petroleum Resources, chief Timipre Sylva hinted that the commissioning of the plant is directly linked to the declaration of Decade of Gas by President Muhammadu Buhari, which seeks to reinforce Nigeria’s aspiration to leverage on its gas resources estimated at 206 Trillion Cubic Feet to develop Nigeria’s national industrial, commercial and agricultural base.

The minister, who was represented at the event by permanent secretary in the ministry, Dr. Nasir Sani Gwarzo, added that “the deliberate focus of this administration to develop the gas sector is largely the driving force behind NCDMB commercial intervention in partnering with the private sector, to establish Butane LPG bottling plant in several Northern states including Katsina, Kano, Kaduna, Bauchi, Niger, and the  FCT.

In his comments, chairman of Butane Energy Limited, Alhalji Isa Mohammed Inuwa explained that the motivations of the project are to preserve the vegetation and discourage the use of wood to heat food, create job opportunities for the teeming youths and grow the business profitably.

He underscored the importance of NCDMB’s equity investment to the project’s development, adding that, the plant in Kastina could be expanded to 160 metric tons