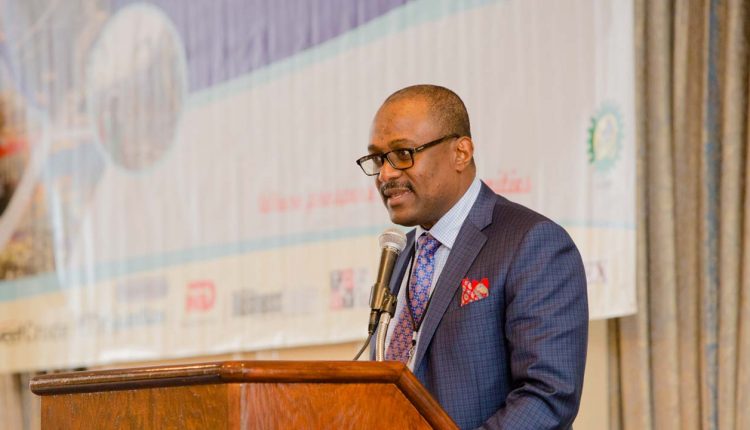 Nigerian Content Development and Monitoring Board (NCDMB) unique strategies in overseeing the implementation of the Nigerian Oil and Gas Industry Content Development (NOGICD) Act has resulted in an ever-growing success story of improved local content in the Nigerian oil and gas industry, and this has continued to attract deluge of accolades to the Board and its leadership. NCDMB success story is heard and celebrated in Nigeria and in the global arena. Peace Obi in this report chronicles a few of the awards, commendations and accolades the Board’s uncommon achievements garnered in 2018

The morning they say is a critical time that can set the tone for the entire day. For the Nigerian Content Development and Monitoring Board (NCDMB) and its award-winning Executive Secretary, Engr. Simbi Wabote, the year 2018 started off on a good note with commendations and pledges for support coming from different quarters where the impact of the Board’s activities is felt and appreciated. Flowing in from the legislators, judiciary, industry players, academics, and even international observers, 2018 remains one outstanding year that NCDMB.

To open what will later become a floodgate of accolades, was the Senate Committee on Local Content’s commendation to the Board on its result-oriented approach to the implementation of the Nigerian Oil and Gas Industry Content Development (NOGICD) Act on 12th February 2018. The Senators’ seal of approval for the NCDMB’s activities came during a three-day capacity building workshop in Ghana where the NCDMB Executive Secretary, Engr. Simbi Wabote made a presentation on the Board’s mandate, operations, the regulatory framework, the journey so far and the challenges of enforcing compliance. The Chairman, Senate Committee on Local Content, Senator Solomon Adeola along with his colleagues after the presentation realised the zeal and passion with which the Board pursues its national assignment, unanimously concluded that the Board was fulfilling its mandate and purpose for its establishment. The Senate committee in addition to their commendation pledged continuous support for the Board.

The Senate, having set the ball rolling, in March, the Oil and Gas Trainers Association of Nigeria, OGTAN during its first National Education Summit that held in Lagos conferred the Local Content Development Achievement Award on the Board’s Executive Secretary. Presenting the award, the President of OGTAN, Dr Mayowa Afe noted that Wabote was honoured against the backdrop of the Board’s diligence in the discharge of its mandate as well as for the NCDMB youth empowerment initiatives.

Spreading like a wildfire, the message of NCDMB’s stride in the pursuit of local content policy implementation, soon got to the judiciary circle when the NCDMB’s Executive Secretary made the list for the maiden edition of JURIS LAW Office Award titled “Rule of Law Award”. According to the founder of Juris Law Office and President of the International Institute for Petroleum, Energy Law and Policy (IIPELP), Niyi Ayoola-Daniels, the award was in recognition of the efforts and outstanding achievements of Simbi Wabote for driving positive change in Local Content in the oil and gas industry, using the instrumentality of the Rule of Law and the institution of the judiciary to ensure compliance.

Presenting the award to Wabote, a legal luminary, the former Chief Justice of Nigeria and Chairman Advisory Board of Juris Law Office, Hon. Justice Alfa Belgore noted that the award seeks to honour leaders who are taking significant steps towards promoting rule of law and economic growth in Nigeria.

Still flowing in, CWC, a world-leading event organisers and training producer for the oil, gas and infrastructure industries in July conferred on NCDMB with the first Dr Alirio Parra Award for outstanding contributions to the Nigerian oil and gas industry.

The NCDMB’s Executive Secretary was presented with the award at a gala dinner that held in Abuja to mark the end of the 2018 NOG conference in Abuja.

According to CWC and Levmora Services, organisers of the NOG conference, NCDMB was chosen for the Dr Alirio Parra Award for being the most outstanding federal agency in the Nigerian oil and gas industry.

And the walls they say do have ears! In the global arena, the efforts and commitment of the NCDMB in the development of the innovative approaches to increase indigenous companies’ participation in the country’s oil and gas projects and engendering business opportunities locally did not go unnoticed. Thus, at the 2018 Africa Oil Week in Cape Town, South Africa, Nigeria stood tall with a global recognition when the Executive Secretary, Nigerian Content Development and Monitoring Board (NCDMB), Engr. Simbi Wabote was conferred with a global award of excellence for outstanding contributions to sustainable local content development in Nigeria and across Africa’s Oil and Gas Industry.

The award which was conferred on Wabote by the organisers of AOW at the Petro Africanus Dinner was part of the events marking AOW’s 25thanniversary celebration.

Engr. Wabote’s selection and suitability for the award was again hinged on his unprecedented contributions to the localisation of industry knowledge and expertise, monumental capacity development programs in Nigeria with cross-border impacts, trenchant advocacy of the imperatives of local content practice and benefits, smart regulations and rare leadership capacity to balance dialogue between international commercial ventures and national interest.

AOW, a premier international oil and gas summit, which brings together over 70 governments, national oil companies, investors, regulators, licensing agencies and leaders of major oil and gas companies that shape the continent’s upstream hydrocarbon landscape in Africa again created the platform for global recognition of NCDMB’s ‘magic wand’ on local content policy implementation. It was discovered that Wabote’s award for Local Content excellence by AOW/ITE Group was the first of its kind in the 25 years history of AOW.

In his acceptance speech, Wabote expressed delight at the honour and recognition by AOW/ITE Group, noting that the award was significant as “it communicates AOW’s acknowledgement of the Board’s programmes and strategies for localizing industry knowledge and capacity development”.

Yet, the echo of Wabote’s exploit through the instrumentality of local content policy (NOGICD) Act was heard and celebrated even among the academics. The ES, on Thursday, November 22, in Port Harcourt, Rivers State was inducted as a Fellow of the Institute of Petroleum Studies (IPS), the University of Port Harcourt for his exceptional accomplishments in engineering, strategic management and local content leadership in the Nigerian oil and gas industry. The prestigious award was part of the flagship programme of the Institute’s 15t Induction Ceremony/Exhibition which took place at Ebitimi Banigo Auditorium, University of Port Harcourt.

The induction is considered a rare honour as NCDMB ES was one of the two persons admitted to the fellowship of the Institute this year. The second person, Hervochon Joel is a French national and Executive Director, Deep Water District, TUPNI, Lagos. Both professionals were inducted for their distinguished career in the oil and gas industry, spanning nearly thirty years.

The maritime sector was not left out as it also joined in celebrating and nudging NCDMB for greater achievement when the Nigerian Chamber of Shipping (NCS) Governing Council paid a courtesy visit to the Board’s Executive Secretary at the Board’s Head Office in Yenagoa, Bayelsa State on November.

Speaking on behalf of the delegation, the President of NCS Governing Council, Mr Andy Isichei said that the Council had observed the phenomenal achievements of Engr. Wabote-led NCDMB, particularly its transparency in administering the Nigerian Content Intervention Fund (NCI) Fund. Isichei said, “we have observed the uncommon achievements of your Board, hence we decided to come and voice our commendation to you and to encourage you to continue the good job you are doing. We are proud of your agency and want to collaborate with you to advocate and propagate the achievements of your Board.”

And another award and commendation that reiterate the industry players’ and core stakeholders’ endorsement came with the Petroleum Technology Association of Nigeria Chairman’s Award for Local Content Personality of the year. PETAN had during its 13th Oil Industry Achievement Award ceremony with a theme, “Forging ties, driving growth stability through Nigerian Content Cooperation” that held in Port Harcourt on the 30th November, 2018 presented the NCDMB’s Executive Secretary with the award in recognition his contributions for the development and growth of Nigerian Content in the country’s oil and gas industry.