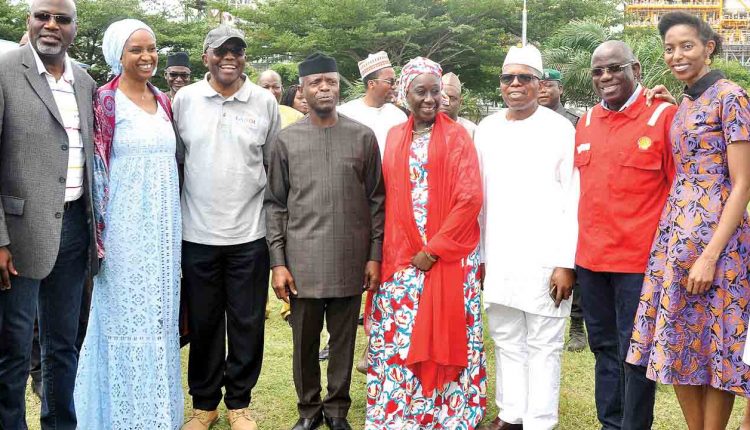 The Acting President, Prof. Yemi Osinbajo, has described the successful anchor of the $16bn Egina Floating Production, Storage and Offloading project as a clear demonstration of government’s commitment to the Local Content Policy and the success of the ease of doing business in the seaports sector.

Osinbajo said this when he paid a working visit to the Lagos Deep Offshore Logistics (LADOL) Free Zone in Lagos, recently.

He said that the enabling business environment provided by the government, now spurs people to invest in the country, adding, “all the critical issues like getting licenses, getting contract signed are being worked on.”

LADOL currently plays host to  Egina FPSO which is reputed to be the first of its kind in the sub-Saharan Africa and a Nigerian content measurable achievement.

The project is handled by the Samsung Heavy Industries on behalf of Total Upstream Nigeria Limited, with LADOL serving as its local content partner.

The Acting President said that the federal government’s commitment to the $16 billion Egina Floating Production Storage and Offloading (FPSO) project had demonstrated its commitment to building a strong and viable economy.

Osinbajo also expressed the hope that the successful delivery of the project will attract more investments in the country, particularly in the area of FPSOs.

The acting President praised the Managing Director of the Nigerian Ports Authority (NPA) for putting an end to monopoly in oil and gas logistics stressing that the cost benefits that has accrued to operators as a result, will lead to more investment in more FPSOs.

He said the government alone cannot provide the funds needed for economic growth in the country, adding that the need for huge funds for development necessitates the involvement of the private sector.

Referencing LADOL as one of government’s local content initiatives in the country, Prof. Osinbajo said the company has been at the fore of anchoring developmental projects in the maritime, and oil and gas sector in Nigeria.

“Excellent work has been done here and this would be sacrosanct to the Economic Recovery and Growth Plan of government in the long run as would be evident in the nation’s Gross Domestic Product in no distant time.”

He also noted that the success of $16 billion Egina FPSO project had demonstrated the Federal Government’s commitment to building a strong and viable economy.

Osinbajo expressed the hope that the successful delivery of the project will attract more investments into the country, particularly in the area of FPSOs.

Speaking further, the Vice President disclosed that monopoly in Nigeria’s business environment as well as government-controlled economy is a disservice to the national economy and country’s development.

He stated that a private sector-led and free market economy remains critical to the growth, industrialisation and development of the nation. “This project, for example, is a $16 billion project in naira terms that is about N5 trillion.

“This is the story of developed economies that are private sector-driven, as there is no way that government’s revenue can possibly satisfy the demand.”

The Managing Director, Nigerian Ports Authority, NPA, Hadiza Bala-Usman, said that the successful berthing of Egina FPSO was as a result of operational efficiency and very robust synergy between the NPA, LADOL and other stakeholders.

Usman encouraged other operators to emulate the investments made by Total, LADOL and Samsung Heavy Industries, adding that government had provided a level playing field through anti-monopoly policies which had yielded great dividends.

The Managing Director, Total Upstream, Nigeria, Mr. Nicolas Terraz, said his company would continue to invest in Nigeria’s economy, as it had invested over $10 billion in the last five years.

Represented by the Deputy Managing Director, Deepwater, Ahmadu-Kida Musa, Terraz explained that the Egina project, a deepwater development project, is the largest ongoing investment project in the nation’s oil and gas sector.

In his presentation, the Chairman LADOL, Mr. Ladi Jadesimi said the company is committed to the development of local content in the country and towards industrialization.

He said, “What we at LADOL are focusing on is that from this point on, local content continue to increase and most of that increase will take place outside of LADOL.

“The EGINA project in terms of its local content has demonstrated to the entire world that the most complex industrial process in the world can be done in Nigeria and nothing should be allowed to overshadow that. Because that is the critical thing that will enable us to move forward and do more in the future and that is what matters”, he said.