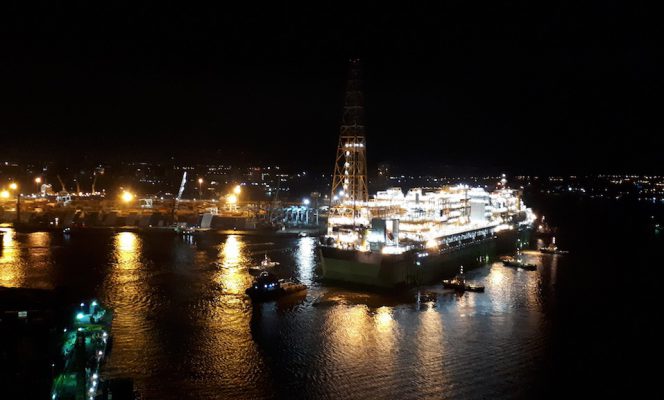 The Egina oil field is located some 130 kilometers off the coast of Nigeria at water depths of more than 1,500 meters.

Samsung Heavy won the order to build the Egina FPSO in 2013. The newbuild contract is worth over $3.4 billion, a turn-key project in which Samsung covers the entire engineering, design, procurement, construction, transportation, and commissioning.

SHI earlier formed a joint venture with a Nigerian local company and established a mega production facility in Lagos, Nigeria to meet the local content requirements. The yard was completed in October 2016.

Egina, one of the world’s largest FPSOs, left Samsung Heavy’s Geoje shipyard in South Korea at the end of October 2017 and arrived at LADOL Free Zone in Lagos, Nigeria, for final integration of topside modules built at the Free Zone in January 2018.

SHIN has completed the Egina FPSO work in SHI-MCI yard under the Nigerian local content regulations. This volume of onshore work was never before accomplished in Nigeria, therefore, the major risky portion of Egina project has now been completed.

Following the completion of the works in Lagos, the FPSO sailed away to its final location offshore Nigeria on August 26, 2018.

According to Samsung, the only major balance work now is the remaining commissioning work in offshore and to make the FPSO ready for entry of hydrocarbon within 2018. Egina FPSO’s peak production of 200,000 barrels per day will increase Nigerian crude oil production by 10%.

The FPSO is to be installed at Egina offshore field. This mega facility is 330m in length, 61m in breadth, and 34m in height. It boasts 200,000 barrels of production per day at the peak and 2.3 million barrels of storage capacity with topsides weighing 60,000 tons.

A representative from Samsung said: “We are very proud to announce the successful completion of the first ever Nigerian onshore integration works for Egina FPSO with thorough preparation in compliance with Nigerian local content, both schedule and cost management have been proceeding as planned.”

French oil company Total is the operator of the Egina oil field with CNOOC, Petrobras, and Sapetro as partners.